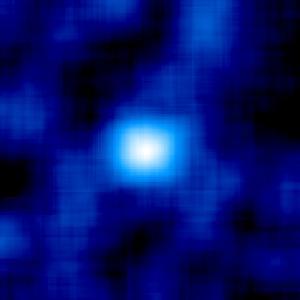 Willman 1 (Wil 1) is a satellite galaxy of our own Milky Way and by far the smallest galaxy known. It was discovered in 2004 by Beth Willman of New York University, orbits 120,000 light-years from the center of the Milky Way Galaxy.

Measurements made by a team of astronomers led by Nicolas Martin of the Max Planck Institute for Astronomy in Heidelberg, Germany, and published in 2007, shown that the stars within Willman 1 are moving at an exceptionally low velocity implying that this dwarf system has a very small gravitational pull equivalent to a mass of only about 500,000 times that of the Sun.

Martin and his team caution that it is possible for a heavier galaxy to mimic a lighter one, for example by having much more dark matter than one would expect in its outskirts. However, if Willman 1 really is as lightweight as it seems, then it may be only the first of many such ultra-low-mass galaxies waiting to be found. Hundreds of such systems could be in orbit around the Milky Way alone.