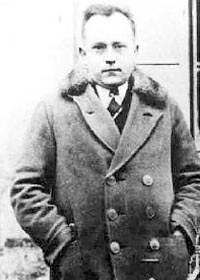 Johannes Winkler was a German engineer and editor of the Verein für Raumschiffahrt's journal Die Rakete who on February 21, 1931, supported in his research by Hugo A. Huckel, launched the first rocket powered by a liquid-propellant engine in Europe. The 60-cm-long, 30-cm-wide rocket, called the Huckel-Winkler 1, was powered by a combination of liquid oxygen and liquid methane. Launched near the city of Dessau, the Huckel-Winkler 1 reached an altitude of about 300 m. Unfortunately, its successor was not as impressive. The Huckel-Winkler 2 took off from a site near Pillau in East Prussia, on October 6, 1932, caught fire, and crashed having reaching an altitude of just 3 m.