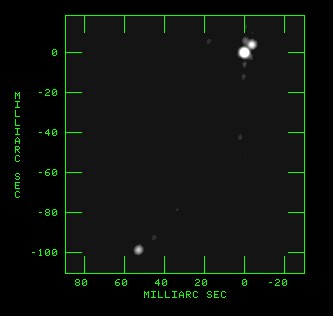 This image of the triple star system Eta Virginis is the first ever made by an optical interferometer using the combined beams of 6 separate telescopes. The closer pair of stars have an angular separation of about 5.4 milliarcseconds, equivalent to the size of a US cent coin viewed from a distance of 800 km (500 miles). This level of detail would require a single monolithic telescope mirror in excess of 50 meters in diameter. Credit: US Naval Observatory.

Zaniah (Eta Virginis) is a triple star system in the constellation Virgo which, in 2002, became the first object to be imaged by combining the light from multiple telescopes (the Navy Prototype Optical Interferometer), a major breakthrough in optical interferometry. The high-resolution image, which would have required a single instrument with a 50-meter aperture, showed the three components of the system as separate entities for the first time. Zaniah, also known as Zannakh, consists of three A stars: a very close pair separated by just a few milliarcseconds (equivalent to less than half the Earth-Sun distance), and a third component about 0.06" away.