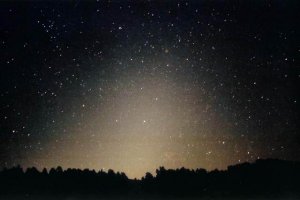 The zodiacal cloud is a tenuous, flattened disk of dust orbiting within the inner part of the Solar System out to about 5 astronomical units (almost the distance of Jupiter). It is fed erratically by the disintegration of comets close to the Sun, and by dust from collisions in the asteroid belt. Zodiacal dust consists of particles, ranging in size from 1 to 300 microns in diameter. Observable structures in the zodiacal cloud include dust bands associated with the major Hirayama families of asteroids and a circumsolar ring of particles in resonant lock with Earth. Observations by the Cosmic Background Explorer have also shown that the center of symmetry of the cloud is offset from the Sun and that the cloud is warped.

The lifetimes of particles in the zodiacal cloud with diameters less than a few hundred microns are determined by the Poynting-Robertson effect rather than by mutual collisions and this gives times for significant orbital evolution of the dust. Orbital evolution allows for passage through secular resonances and for trapping into mean motion resonances and it is these interactions that give rise to the features of the disk.

The zodiacal cloud can be seen at certain times of the year as a second "Milky Way", known as the zodiacal light, along the ecliptic. It can sometimes be seen under very dark sky conditions, along the horizon, either just after dusk or before sunrise.