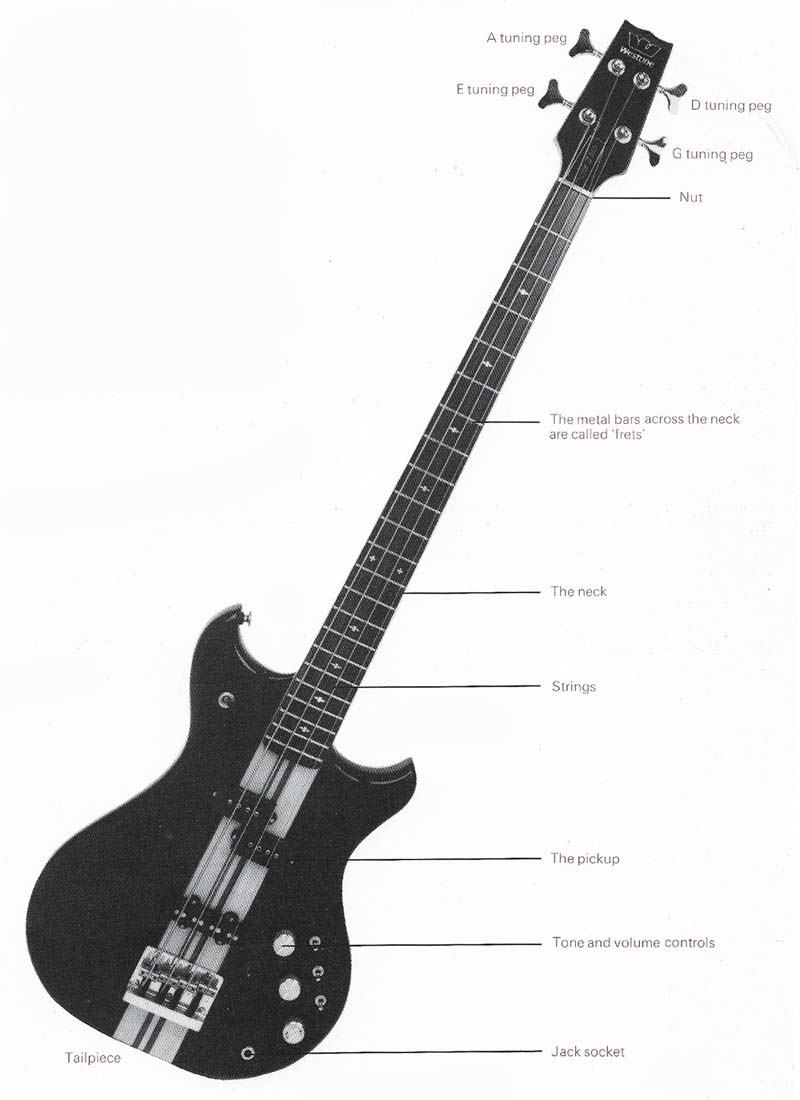 The electric bass has three main sections: head, neck, and body. It is straddled by roundwound metal strings which run through the tail-piece onto the bridge across the pickups and on to the neck. Strings are held in position by grooves cut into the nut (top of the neck) which channel them to their respective tuning pegs. This allows great adjustment of each string. The fingerboard is divided up by frets, metal bars sunken into the neck which protrude an 1/8". This enables the alteration of pitch by pressing the string onto the fingerboard just behind a fret. Dots on the fingerboard are generally placed at frets 3, 5, 7, 9, 12, 15, 17, and 19 as a quick visual reference for notes and hand position. 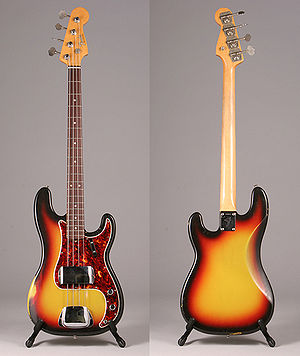 The electric bass is similar in both appearance and operation to the electric guitar, but is actually a descendent of the upright acoustic double bass. The double bass had long been an integral part of the jazz rhythm section, but the increasing need to compete with amplified instruments – not to mention the transportation problems caused by the sheer bulk – made players and manufacturers seek amplified alternatives.

The electric bass has a slightly larger body and longer neck than an electric guitar and usually has four strings – tuned in fourths, E, A, D, and G. Variants include different numbers of strings – often adding a fifth, tuned to B or A below the bottom E string – and fretless models. The fretless design has a characteristic mellow tone and facilitates the technique of sliding between notes. The bass is usually plucked with the thumb or a plectrum but some players have pioneered percussive 'slap bass' styles.


History and development of the electric bass

The earliest known example of a solid-body electric bass dates back to 1935 in the form of an upright instrument designed by musician and amplifier-maker Paul H. Tutmarc, for the Audiovox Manufacturing Company of Seattle. The same company later developed a bass instrument placed across the body like a guitar. The Model #736 Electric Bass Fiddle, as it was known, was also innovative in that, unlike the double bass, it was fretted, enabling less secure players to achieve precise intonation.

This idea was also incorporated into the first mass-produced electric bass, the Fender Precision Bass of 1951. Very early Precisions bore a strong resemblance to Fender's first solid-bodied guitar, the Broadcaster/Telecaster, having a rather square body formed from ash, a maple neck, and strings tuned to E A D G, an octave lower than they are on a conventional guitar to corresponding to the tuning of a double bass. The Precision bass had just a simple, single coil pickup, 20 frets, and a set of four massive open-backed Kluson machine heads.

In 1957 one major change was made – Fender added a split pickup. This pickup was unusual in that it had one half working on the top two strings and the other handling the bottom pair, the idea being to give a better frequency coverage. Each half of the new pickup had four pole pieces and the new sound made a considerable difference to the Precision's uses. The design of the Precision has since remained relatively unchanged.

Another classic instrument instrument introduced by Fender, in 1960, was the Jazz Bass. Superficially similar to the Precision, the Jazz bass has an offset body and a neck which is considerably narrower at the nut, making it faster to handle. The Jazz also featured two pickups and offered a much better tonal range than the Precision.

In 1968, Fender introduced the Telecaster bass, which sought to replicate many of the qualities of the original 1951 Precision model. It is the Precision, however, which remains the yardstick by which other basses are judged.

Gibson, having seen Leo Fender's new instrument make considerable waves, decided that they would follow suit and in 1953 launched the EB-1, an ungainly looking shorter-scale instrument which was to provide the model for the Hofner Violin bass later adopted and immortalized by Paul McCartney. The EB-1 was not a great success. However, the semi-acoustic EB-2, launched in 1958, fared better. Essentially this model was a large version of their popular ES-335 guitar and alongside the contemporary (and Gibson-manufactured) Epiphone Rivoli bass – which was a virtually identical instrument once its pickup had been changed to the EB-2's type sold well and was the mainstay of many 1960s beat groups.