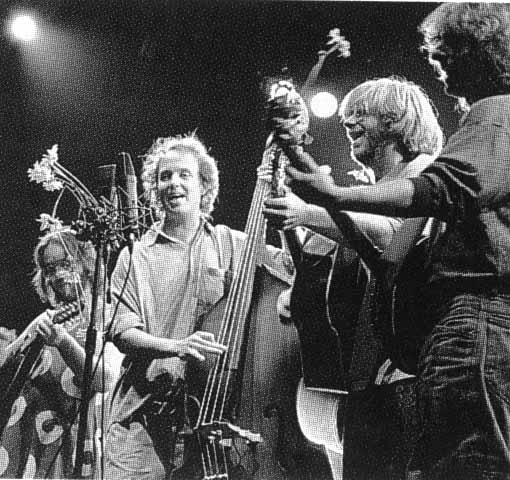 Bluegrass is an early form of country music that combines the gospel-tinged vocals of the Blue Ridge Mountain region with folk melodies. Instrumentation generally includes guitars, banjos, mandolins, and fiddles. It originated in Kentucky in the mid-1940s but has antecedents in "hillbilly" music and minstrel styles. The style became recognizably formalized and widely popular through the work of Bill Monroe and his original Bluegrass Boys (who gave the music its name) during the years 1945–1948.

Prominent features of bluegress are a melodic, three-finger style of banjo picking (Earl Scruggs), the mandolin as a lead instrument, often soloing against a rhythmic background, and close-harmony singing.

Bluegrass influenced rockabilly; e.g. Elvis Presley's version of Monroe's "Blue Moon of Kentucky" on his Sun debut. The style has been maintained and is evident in the work of mainstream artists such as Emmylou Harris. Bluegrass gained wider attention in the 1990s with the crossover success of Alison Krauss, and the soundtrack of the movie 0 Brother, Where Art Thou?, which showcased a range of traditional bluegrass songs covered by contemporary artists. The continued appeal of bluegrass can be partly attributed to its connotations of authenticity, as a form of roots music.