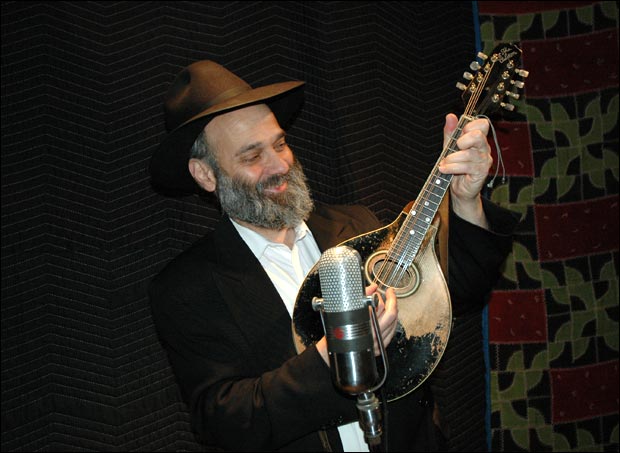 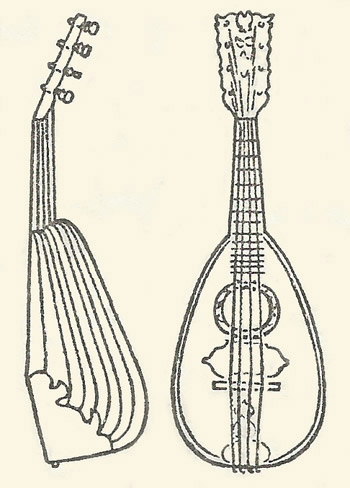 The mandolin is a small, teardrop shaped, plucked stringed instrument, the most famous form of which is the Neapolitan mandolin. It is descended from the lute and, since its rejuvenation in the nineteenth century, has remained a popular and versatile instrument.

The mandolin developed from the Italian mandola. The mandola and its French equivalent, the mandore (not to be confused with the mandora: a bass lute commonly used for continuo accompaniments in eighteenth-century Germany), was a small lute used in the sixteenth century. Lutes, however, used six courses, each made up of a pair of strings tuned to a characteristic pattern of fourths and fifths. By contrast, the mandola had only four courses and was tuned in patterns of perfect fourths and fifths.

The mandolino retained its popularity through the seventeenth and eighteenth centuries and hardly altered its form. Like the lute, its body had a rounded back and flat front with a rosette inserted into the sound hole, to which was attached a fingerboard with eight or nine gut frets tied around the fingerboard to stop the strings.

The mandolino received its first major reworking in the mid-1800s at the hands of the Monzino family in Milan. The body was increased in size and the overall instrument strengthened. The frets were changed from gut ties to inlaid metal or bone rods and increased in number to about 20. This instrument became known as the Milanese mandolin.

Standard performance technique on the lute was to use the fingers to pluck the strings, and it is clear that the mandolino was initially played in the same manner. During the eighteenth century, though, players began to use a plectrum to sound the strings. This characteristic performance technique was first carried out using quills, either attached to the index finger or held between thumb and index finger. By the beginning of the twentieth century this style of playing had become the norm and it remains one of the mandolin's distinctive features.

The Monzino family's development of the Milanese mandolin in the 1800s was complemented by Pasquale Vinaccia of Naples who, in 1835, built a mandolin that has remained the standard to this day.

The Vinnaccis family had been active in instrument making for several years and in 1740 its members built a four-course mandolin tuned in perfect fifths, as opposed to the mixture of perfect fourths, and fifths common to the mandolino. The particular selling point of the Vinaccia mandolin was that it was tuned in exactly the same way as a violin: g-d'-a'-e". This meant it was immediately accessible to musicians and the Vinaccia model quickly spread through Europe.

The small size of the mandolin meant that it had little resonance, so notes decayed very quickly. The polyphonic style of music played by lutes meant this had never previously caused problems, but the immense popularity of the mandolin among less-skilled performers increased the demand for simple music. To combat this, performers repeatedly rearticulated single notes to give the impression of sustaining them. The tremolo technique, as it was known, was immensely popular among Italian street musicians, though it was frowned upon by the more highbrow classical mandolinists.

By the beginning of the twentieth century, the mandolin's popularity had spread to the US where it was famously taken up by Bill Monroe, one of the earliest exponents of the country-bluegrass style, and it became part of the characteristic bluegrass sound. As jazz developed, the mandolin went with it and was used with success by musicians such as Sammy Rimington and Dave Grisman.

The mandolin became increasingly common in folk music during the twentieth century. In Ireland it is often a partner or substitute for the violin, where its characteristically bright sound is ideally suited to the jigs and reels central to the repertoire. The mandolin is also popular in Brazil, where it is most often heard in a small ensemble playing a style of music called choro. Similar to the tango, the choro was especially popular during the early to mid-1990s.

The mandolin has proved immensely popular in Japan. It was often heard in the early twentieth century performing characteristically Italian music, but a number of composers grew fond of the instrument and began to incorporate it into their own style. The 1940s saw a strong growth in its popularity and by the 1990s the Japan Mandolin Union boasted over 10,000 members.

Despite its popularity in folk music, particularly in bluegrass, the mandolin has yet to develop a serious body of solo work. Its particular timbral qualities – high pitch, little sustain, limited variety of color – suggest that it is unlikely to gain acceptance as a heavyweight. Nevertheless, its flexibility and clarity of articulation ensure that in the right context it remains a hugely enjoyable instrument to listen to.