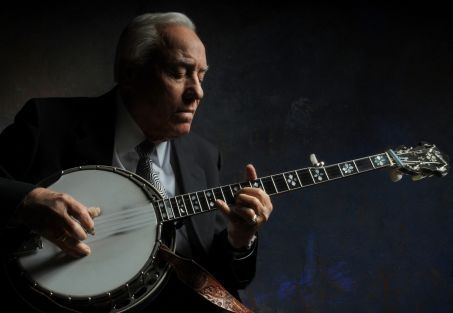 The banjo is an instrument of the same general type as the guitar, but the resonating body is of plastic (or, in earlier times, parchment) stretched over a metal and wood hoop. There are from 4 to 9 strings (usually 5 or 6), passing over a low bridge and stopped against a fretted fingerboard: one is a melody string (thumb string, or chanterelle), the others providing a simple accompaniment of chords. Some examples have nylon or gut strings (played with the finger-tips) and others have wire strings (played with a plectrum). The ultimate origin of this instrument is supposed to be Africa, and it was in use among the slaves of the Southern USA; then, in the 19th century, it became the instrument of "Negro Minstrels" and in the 20th found a place in jazz bands. These last sometimes use a tenor banjo, with a different scheme of tuning (resembling that of the violin family). The zither banjo is of small size and has wire strings.

Most banjos today are made with four or five steel-wire strings attached to a ring of laminated wood about 11 in (28 cm) across. A plastic skin is stretched over the ring immediately below the strings, and very often a wooden resonator is attached to the ring's underside.

A unique feature of the five-string banjo is its short thumb string. The four full-length strings are tuned to D-G-B-D while the thumb string is tuned to top G: the highest note of the five. The fifth string is attached to the side of the neck at the fifth fret position and is used like a drone, always sounding the same note in passages of figuration, whatever the underlying chord is. Equally common is the four-string banjo, which usually lacks a thumb-string.

The most common method of playing the banjo today is the fingerpicking technique. Many players use picks: one for the thumb and one each for the first and second fingers. Partly this is for ease of playing, but it also creates a crisp sound that isn't easily replicated with the fingers alone. Four-string banjo players usually prefer the flat-pick.


History of the banjo

The roots of the banjo lie in the French and British colonies of Africa, where instruments were made from a hollowed-out gourd covered with animal skin, bamboo neck, and catgut strings were popular. Particularly associated with celebrations and dancing, these instruments went by a variety of names including banza and banjer. Similar instruments also existed in South Africa which were possibly adaptations of the cavaquinho.

The journey from Africa to America was made during the slave trade. There are paintings from South Carolina in the late 1700s showing slaves dancing to the music of gourd banjos. The transition from the gourd-body to the instrument known today is generally thought to have been due to innovations of Joel Walker Sweeney (1810–1860) in the 1830s. Some doubt has been cast on the extent of his role in the banjo's modernization, but he certainly had a strong influence.

Sweeney's use of the banjo was in his minstrel group, the Sweeney Minstrels, a band who blackened their faces as a gimmick. This rapidly caught on and by the 1850s the banjo and its minstrel musicians were popular throughout the southern states of the US. During the American Civil War (1860–65), minstrel shows were a popular entertainment among soldiers, who took back home with them their appreciation of the banjo.

The banjo's big break came with the growth of parlor music. This association lifted the instrument from its links with the lower classes and brought it almost universal attention. By this time, two distinct styles of playing had emerged. The traditional, or stroke, style is today known as "clawhammer" or "frailing", in which the player strikes the string using a downward motion of the finger, making contact with the upper portion of the nail. In contrast, the fingerpicking style is more akin to the guitar technique, using the underside of the nail and the finger in an upward motion.


The banjo and ragtime

The banjo's staccato sound made it ideally suited to the ragtime style that developed around the turn of the century. The jagged, syncopated character of ragtime increased the banjo's appeal and by the 1920s it had begun to play a part in the birth of jazz, appearing in the Dixieland bands of New Orleans. Surprisingly, the banjo was also used in the blues, where its role was much more like that of a guitar.

Ragtime used the banjo mainly as a rhythm instrument, working together with the drum section, and its qualities as a solo voice were increasingly overlooked. It soon began to give way to the guitar, and the electric guitar in particular. The 1940s, however, saw a revival in the banjo's fortunes with the development of bluegrass in the southern US. A combination of dance and religious music, bluegrass showed off the best of the banjo's attributes: strong rhythm, clear articulation, and agility.

The banjolin is an instrument of the banjo type, but with a short, fretted neck, like that of a mandolin. It has 4 single (or pairs of) strings, played with a plectrum.