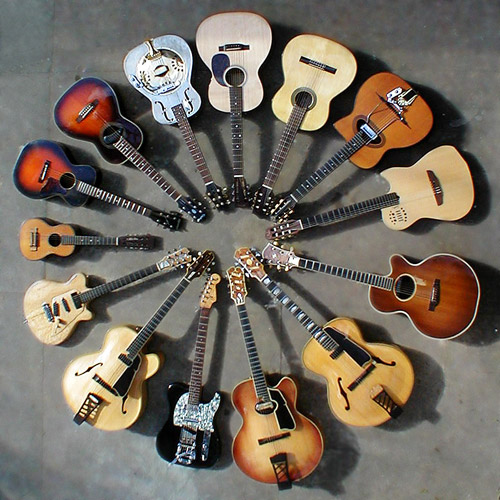 The word guitar is derived from the Spanish word guitarra. A guitar is a stringed instrument that traditionally has 6 strings (although there are such things as 7-, 8- and 12-string guitars) and can be plucked or strummed. It has a flat or slightly rounded back. Guitars can be acoustic, semi-acoustic or electric. Acoustics and semi-acoustics consist of a hollow body. Semi-acoustics and electrics are played with amplifiers via pickups.

The various version of the modern guitar developed ultimately from the short-necked lutes that first appeared in central Asia during the fourth and third centuries BC. However, the more immediate ancestors of the guitar as we know it today arose in the Renaissance period. These include the vihuela and the Baroque guitar.

The earliest guitars with six single strings began to appear in the second half of the eighteenth century. The gut frets gave way to specially created fingerboards with ivory or metal frets built in; the central rose became an open sound hole; the neck narrowed; and the proportions were altered.

There was still no standard technique at this point – performers were even divided about how best to strike the strings: with the nail or not. Nevertheless, it is as this point that the first lasting guitar music was written, for example that of Fernando Sor (1778–1839) and Mauro Giuliani (1781–1829).

The work of Spanish instrument maker Antonio de Torres Jurado was central to the development of the modern guitar. He set the vibrating string length at 65 centimeters (26 inches), increased the overall dimensions, used 19 frets, altered the construction of the soundbox and set the standard string tuning of E-A-D-g-b-e'. These alterations were so successful that Torre's model became the standard to which every other maker aspired – and which is known today as the classical guitar. For a while, the Torres-designed guitar remained confined to Spain but thanks to the work of Andrés Segovia (1893–1987) the repertoire and popularity modern classical guitar became much broader.