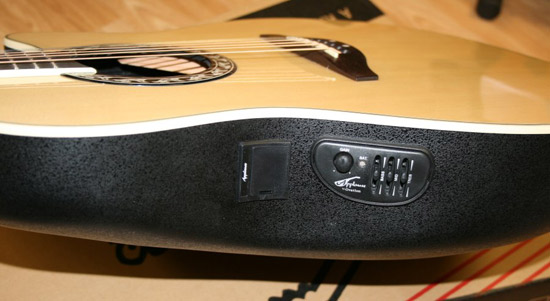 An acoustic guitar is one that doesn't need to be plugged into an amplifier. The body serves as both a sounding board and a resonance chamber – as do the bodies of all acoustic stringed instruments. The vibration of the strings is transmitted to the soundboard via the saddle and bridge (Fig 1). The wooden and hollow nature of the instrument's body then serves to produce the "amplified" sound. Playing "unplugged" is seen as a return to basics and has undergone a resurgence in recent years.

Acoustic guitars may have nylon strings, as in the case of the classical guitar, or steel strings. Steel-string guitars come in several varieties, which are distinguished mainly by their size and shape. The two commonest varieties in use today are the so-called dreadnought and jumbo (Fig 2).

Both dreadnoughts and jumbos are big, loud guitars, with a strong bass response, favored as solo instruments and for vocal accompaniment. The most obvious distinction between them is the narrower waist and slightly wider upper and lower bouts of the jumbo. Cutaway versions allow easier access to the highest frets but at the cost of volume and bass response, which are reduced by 15–20%.

Guitarists seeking a more balanced response, in which the midrange and treble ranges more evenly match the bass, may opt for a smaller instrument, traditionally referred to as a parlor guitar. Although smaller than a dreadnought, and in some cases smaller even than a classical guitar, parlor-type guitars have a wide neck which makes them particularly suited to fingerstyle playing. Their balanced sound works well in a space that has a good acoustics, such as a concert hall (or, in the old days, a parlor, from which the name comes).


Sound quality and choice of wood

An acoustic guitar of good-enough quality to use in performances may cost anywhere from a few hundred to several thousand dollars. The cost is a (not always reliable!) guide to the quality of sound produced, which in turn is a reflection of the quality of construction and, in particular, the choice of woods used in making the instrument – the so-called tone woods.

In high-quality instruments, spruce or cedar are the woods of choice for the soundboard (the front wall of the body) because their soft nature allows them to vibrate easily and sensitively. The back and sides provide structural support, as well as resonance, and so are made of hardwood – traditionally rosewood, but in less expensive guitars, nato, mahogany, walnut, koa, or maple. In the least expensive good guitars, as in the case of the soundboard, veneers provide an adequate and hard-wearing substitute.

The development of amplified music, played in increasingly large venues, presented a challenge to the acoustic-guitar player. Though it is possible to amplify an acoustic guitar simply by playing in front of a microphone, the system can be prone to feedback and limits the player to a static position, a fixed distance from the microphone.

Guitar manufacturers produced solutions in the form of electro-acoustic instruments that had either built-in microphones or electromagnetic or piezo-electric pickups and a preamp. Such instruments can be plugged directly into amplification systems or sent via processors that can enhance the sound with effects such as delay, chorus, or reverb. Modern electroacoustics usually operate off a 9-volt battery, have a basic equalization (EQ) system and often an integrated tuner, and can be plugged directly into a PA mixer.