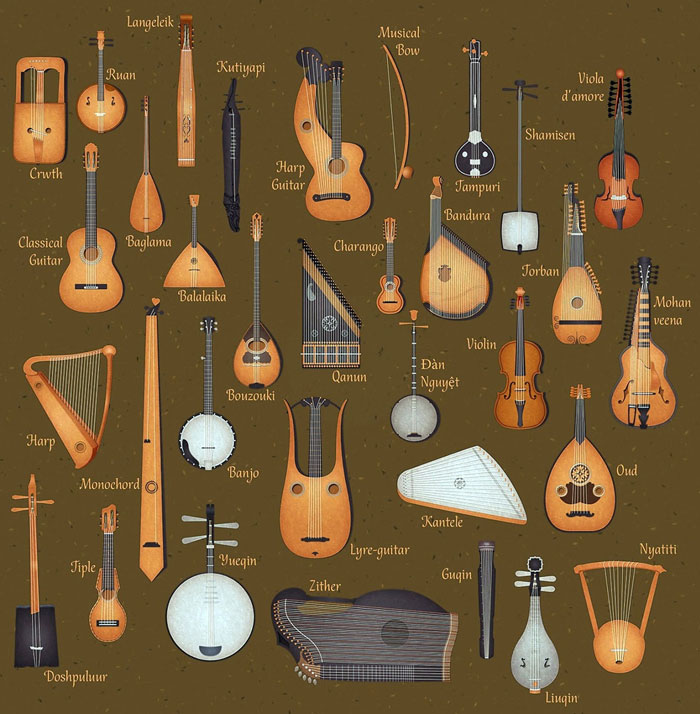 A variety of traditional stringed instruments. 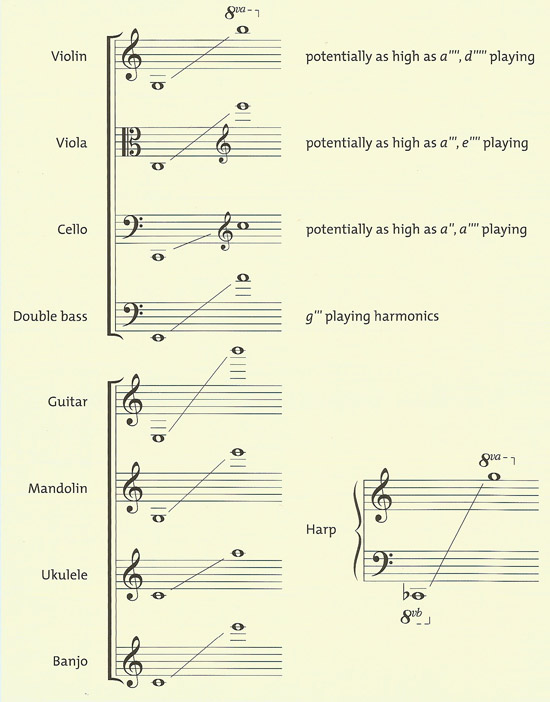 Stringed instruments, or chordophones, are those in which sound is generated from a vibrating string held in tension. They form the backbone of almost every substantial musical culture, probably because of the ease with which they can be tuned, their clarity of pitch, and their great adaptability. There are three types of stringed instrument, defined by the method of sound production: bowed, plucked, and struck.

Gut strings have been used for making music for thousands of years. Examples have been discovered in excavations of ancient Egyptian sites dating from 1500 BC, and there is plenty of evidence of their use in Greek and Roman culture.

Typically, gut strings were made from the small intestines of a young sheep. Washed, scoured, and sliced into strips, then twisted into threads before being bleached and polished. The e" on a violin was normally made from between five and seven threads; the lower strings on the double bass, though, needed 855 or more.

Marin Mersenne (1588–1648), a great French thinker, proved that the pitch a string sounds is not only related to its length. It is also a function of its tension, its diameter, and its density. A long, thin string at high tension will sound higher than a short, fat string at low tension. It is easy enough to see this by plucking an elastic band: held flaccidly its pitch is low; stretched out it becomes much thinner and vibrates quicker so the pitch is higher.

From Mersenne's work came the discovery in Italy that winding wire around the string would increase its mass per unit length, thus enabling strings to sound lower pitches while remaining a workable length – a crucial development for the design of bass instruments.

The invention of nylon in 1938 promised to be a similarly vital moment in string technology, combining great strength with a durability way beyond that of gut. The particular acoustic qualities of gut strings, however, have ensured that they remain in widespread use, most often overspun with aluminum or silver – sometimes even gold.


Body of a stringed instrument

On its own, the string is not an adequate sound-producer; it requires amplification. The body of all stringed instruments is just such an amplification system, designed to accept the string's vibrations, increase their power, and project them towards the listener.

The function of directing the sound is carried out by the back of the body. Thicker than the soundboard, it acts as a reflector, bouncing the sound back into the body then out of the instrument. The back also supports the forces generated by the string tension.

The use of a bow to sound was discovered in the Byzantine Empire in the tenth century. The bow is made of horsehair stretched taut, which is drawn across the string. Horsehair is covered in tiny hooks that grab and release the string as the bow moves over it, keeping it in constant motion. Rosin, a substance made from distilling oil of turpentine, is rubbed on to the hair to help its grip.

The action of the bow means that energy is constantly transferred to the string; in the hands of a skilled player the sound quality is seamless even as the bow changes direction. There are four variables under the player's control: bow speed, bow pressure, where the bow is placed on the string, and the angle at which the bow is tilted. These four factors offer the player an almost limitless variety in timbre.

The plucked string is less flexible than the bowed, most obviously in its lack of sustain: new energy can only be put into the string by re-plucking it, which necessarily creates a new attack. Despite this, plucked string instruments are equally capable of variety in timbre depending on where the string is struck, at what velocity, with what angle of the fingernail or plectrum, and so on.

Striking the string offers the least variability in timbre in essence all that is achieved is the string being shocked into vibrating and subsequently left to its own devices before being damped. Nevertheless, the material of the striking hammer, the makeup of the strings, the quality of the soundbox, and the way a player's touch affects the striking mechanism all have a significant effect on the sound.

Sympathetic strings are those on a bowed, plucked, or hammered instrument which are not played but vibrate merely by sympathetic resonance, so enriching the overall tone. They are very important on certain instruments, such as the sitar.

The adaptability of stringed instruments and their incredible expressiveness have placed them at the center of every major musical culture. The vibrating string is uniquely flexible: it is equally at home in solo instruments, in ensembles large and small, in domestic music-making, in large-scale music making, in acoustic and electronic instruments.

The bowed stringed instruments are preeminent among their peers in western culture, rivaled only by the piano. Violins and viols have been the most vital part of music for the past 400 years. They are the backbone of the orchestra, which stands alongside the string quartet as one of the more extraordinary examples of human creativity. Of all these instruments it is perhaps the violin that stands out as the paradigm. Barely changed since the seventeenth century, it remains the preeminent instrument, second only in expressive power to the human voice.