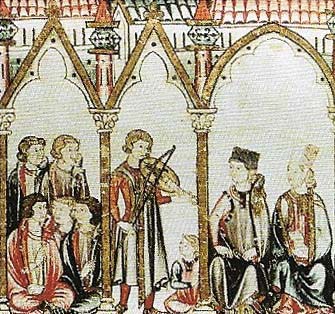 A mid 13th-century fiddler playing with a large arched bow. The stick extends beyond the end of the hair, the projection serving as a handle. 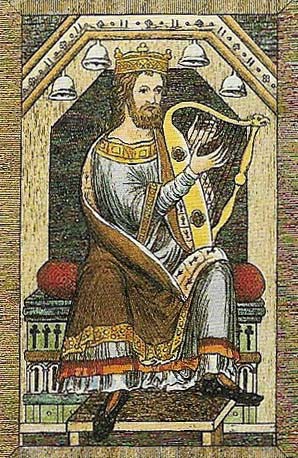 This 13th-century illustration of King David shows him playing a harp whose arching neck terminates in an open-mouthed zoomorphic head. 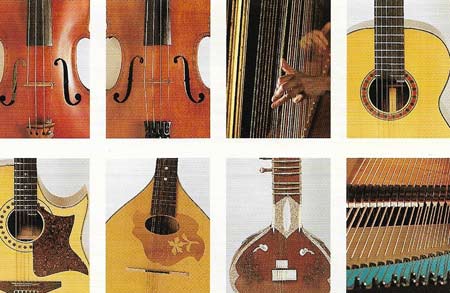 Top row, left to right: Until the 1970s many violinists used gut strings exclusively, but as the high-tensioned E string had a tendency to break easily, it was replaced by wire. Viola strings are usually made of gut. The lower two, or sometimes all, are wire-wound. Harp strings are like piano stnngs, except that they are plucked. Most classical guitar strings are made of nylon. They are usually sounded with the left side of the fingernail but some players prefer to use the right side of their nails.

If we believe Greek legend, it was the twang of a bowstring that first made the god Apollo aware of the musical properties of a vibrating string. The fundamental pitch at which a stretched string, held in tension between two points, is heard, depends upon its length, thickness, weight, and tension, together with the properties of the soundbox or soundboard. The frequency at which a given string will vibrate is inversely proportional to its length, proportional to the square of its tension, and inversely proportional to the square of its mass, while the amplitude varies with the energy imparted and transmitted.

A string for a musical instrument may be made of any material that can produce a musical sound when it is held under tension and plucked, bowed, or struck.

Although most early strings were made out of gut or silk, many other materials have also been used, such as gold wire strings found in Persia dating from the 5th century BC. More recently, nylon or steel strings have become common, and many strings are bound with fine wire.

Gut strings were made from the guts of lambs, from seven to eight months old. After cleansing and pickling in an alkaline solution, the guts were twisted together under tension before being polished with pads made of hair. The final diameter of the string was determined by the number of guts used, which ranged from two for the smallest mandolin string, up to 120 for a double bass.

There are three ways to excite the string: plucking, bowing, or striking. Although plucking excites an active range of high harmonics, they are short-lived. Plucking imparts energy by a single impulse and there is no means of maintaining the vibration. The optimum place to pluck a string is about one-seventh of its length from the end, as this will give the best selection of harmonics as well as amplitude. If the string is plucked either with the fingernails or with a plectrum, it is displaced at a sharp angle and a bright sound is produced, as opposed to the duller sound made when it is plucked with the pad of the finger or thumb.

A more solid sound is obtained by striking the string (as on a piano or a dulcimer). A struck string vibrates longer, giving a slower decay in the upper harmonics. However, in the stiffer and tenser lower strings of the piano the vibrations tend not to subdivide indefinitely into the shorter lengths, causing the upper harmonics to be weaker, with most of the energy going into the lower harmonics. Like the plucked string, the struck string has only a single impulse for each note sounded.

One of the more pleasing sounds achieved from a string is by using a bow, which maintains the supply of energy for vibration and thus permits the playing of sustained notes. The sound depends on the position of the bow and the width of the hair brought into operation. Different sounds can be produced by bowing slowly with the full width of the hair, bowing near the center of the string, bowing swiftly with the edge of the hair, or bowing near the end of the string.