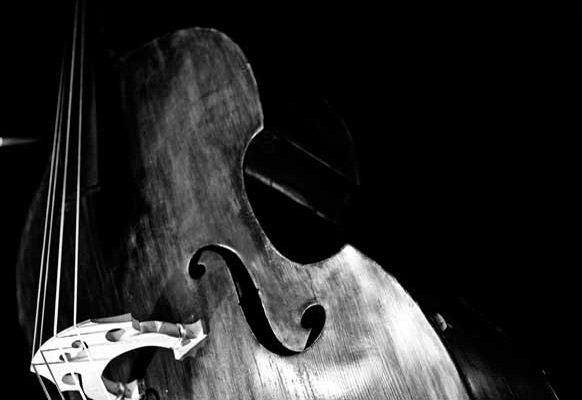 The double bass is the bass member of the violin family. There is no standard double bass design. The instruments commonly used in orchestras are around 115 centimeters (45 inches) high and have four strings tuned to E'-A'-D-G. It is not tuned to the pattern of perfect fifths usually found in the violin family because it would be too awkward to play, since the stretches between notes are large. Some instruments have a fifth string that is tuned either to C' or B".

The history of the double bass is contentious because even today it exhibits characteristics of both the violin and the viol. Examples of double-bass-like instruments appeared in the second decade of the 1520s. These early instruments were likely to have six strings, be tuned in patterns of fourths and thirds, and have frets – all characteristics of the violin family.

During the early-seventeenth century five-string basses were preferred in a variety of tunings. By the eighteenth century the most popular bass was a three-stringed version, most often tuned to A'-D-G. This bass was fretless and remained the normal instrument for orchestral work throughout the nineteenth century. Indeed, the low E' string did not become standard until the early twentieth century; prior to this, passages moving below A' were simply transposed up an octave.

The double bass's dual nature did not deter performers. From the 1700s there have been successful double-bass virtuosos. The end of the eighteenth century saw an explosion in repertoire and, although the appeal of the bass is significantly less than the violin or cello, it has continued to be an instrument that attracts attention, not least in the hands of some of the jazz greats.