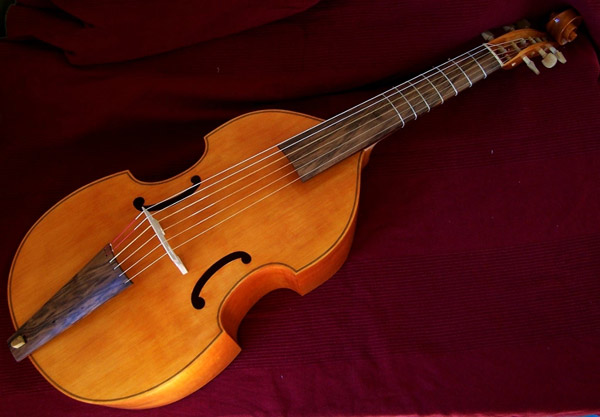 The viol was one of the most popular instruments of the sixteenth and seventeenth centuries, the viol,or viola da gamba, developed alongside the violin family, and has been central to the development of western art music. It is thought that the viol developed from the vihuela, a Spanish guitar-like instrument. At some point a bow was used with the vihuela instead of it being plucked. This necessitated the instrument being turned around so the base rested between the players legs and the neck rose up, parallel to the player's body. The bowed vihuela became known as the vihuela da gamba (or 'leg vihuela') and evidence from Valencian paintings made in the early 1500s suggests that the vihuela da gamba and the viola da gamba were initially very similar in design.

The viol quickly spread from its Spanish roots to other Mediterranean countries and by the mid-sixteenth century, it had become ubiquitous in both amateur and professional circles. At its best in ensemble, the consort of viols formed a vital part of Renaissance music-making; it was combined with consorts of other instruments, and was also very popular on its own. Many households would have a 'chest of viols' containing at least one instrument of each standard size.

Although the viol was made to many different sizes, three were most commonly used: treble, tenor, and bass. The alto viol rarely appears in music or in writings, and the deeper contrabass viol was played mainly by professional soloists. All sizes of viol were played in the same way: they rested wither on the calves or the knees and were bowed using an underhand grip with the palm facing upward.

The viol was a fretted instrument so it was easy to play in tune. There were normally seven frets, each a half-step apart, with an occasional eighth fret enabling each string to play a fully chromatic octave. Viols had six strings as standard tuned in the sequence fourth-fourth-major third-fourth-fourth. So the treble viol was tuned d-g-c'-e'-a'-d", the tenor G-c-f-a-d'-g', and the bass D-G-c-e-a-d'. The strings were made of gut, with lower-pitched strings being covered in silver or another metal to improve their tone. The bow would be like an archer's bow and ideally light and of medium tension.


Fall and rise of the viol

Since neither the bow nor the strings of the viol are at high tension, it is a quiet instrument, its timbre is light and extremely colorful, perfectly suited for playing the many-voiced music for which it is famous. The development of the violin and its siblings, however, inevitably brought about the decline of the viol. In spite of the ease with which the viol could be played, the violin's strength and agility was unbeatable and interest in the viol had dwindled by the mid-1700s.

Curiously, though, it was not long before interest was revived. A series of concerts historiques in France in the 1830s was designed to rediscover the viol's qualities, and a number of cellists also took up the bass viol in the late-19th century. The period since World War II has proved the most fertile time for rediscovery, and composers including George Benjamin, Peter Maxwell Davies, and David Loeb subsequently scored for the viol in new work.