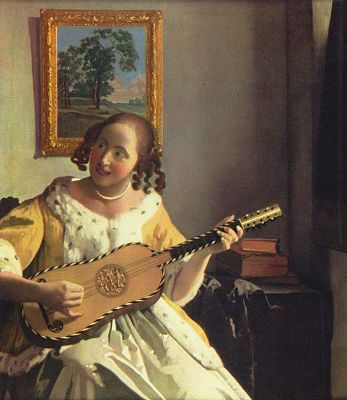 The Guitar Player by Johannes Vermeer.

A Baroque guitar is a small guitar of the Baroque period (c. 1600–1750) with four, five, or more courses of gut strings and moveable gut frets. The first (highest pitched) course was often a single string. Baroque guitars typically had a single, central rose as a soundhole and between eight and ten gut frets. The courses' pitches were by no means set in stone, a characteristic shared with the vihuela: they were often changed to suit the music being performed.

The Spanish vihuelistas looked down at the guitar as a crude instrument, limited to peasant strumming. However, the guitar continued to grow in popularity, while the vihuela became virtually extinct by the early seventeenth century. Eventually, the Baroque guitar displaced the Renaissance lute. Louis XIV was said to play the guitar well, and this forced the top lutenists of the day to add it to their resumés.