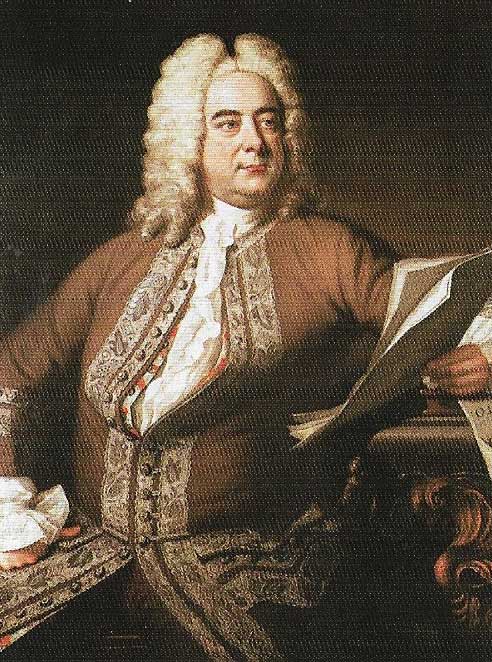 Portrait of George Frideric Handel by T. Hudson, painted in 1749.

The Baroque period is the musical era, and art period, in Europe roughly from 1600 to 1750. The term 'Baroque' was originally applied to the elaborately fanciful 17th- and 18th-century architecture of Germany and Austria and, by association, nowadays to the German, Austrian, and other music of the same period. Major Baroque composers include the later Monteverdi, J. S. Bach, Handel, Vivaldi, Rameau, and Purcell. The period saw the first great flourishing of opera, the development of instrumental forms such as the sonata and the concerto, and the golden age of counterpoint.

The term "Baroque" is thought to derive from the Portuguese barroco, a deformed pearl, implying an imbalance and imperfection in form and style, in contrast to the well-balanced and reserved ideals of antiquity. The first use of the term in reference to the arts is believed to have been in a derogatory review of Rameau's opera Hyppolyte at Aricie (1733). More generally, however, "Baroque" came to describe the lavish visual art style of c. 1600 until 1750 – exemplified by Peter Paul Rubens, Gian Lorenzo Bernini, and Rembrandt – in which both the emotional and the rational response to and artwork were emphasized.

In music, the Baroque period coincided with the introduction of tonality, the major and minor modes used today, and with a simplification of musical texture through monody, featuring one melodic line with bass continuo – that is, chordal accompaniment and a prominent bassline. The Baroque also gave birth to the genre of opera. During the 18th century, the Baroque style became more complex, polyphonic, and ornamented in various genres, including opera, sacred music, and chamber music, culminating in the mature works of Handel and Bach

Baroque music, especially the works of Bach, Handel, and Vivaldi, remains prominent on todays' concert programs, but the era had another important impact. It initiated the "common practice" period, which lasted from roughly 1600 to 1900 and was defined by shared basic notions of harmonic and rhythmic syntax, despite the different aesthetic ideals behind many of the compositions. Several common-practice stylistic traits remain evident in many 20th- and 21st-century genres, such as musical theatre, jazz, and rock . Even the basic ensemble of harmonic accompaniment, keyboard, and a bass instrument is still (with the addition of drums) dominant in popular music.