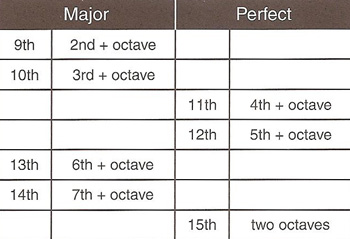 A compound interval is an interval that is greater than an octave. Compound intervals are named 9th, 10th, 11th, 12th, and so on. They can be considered equivalent to their counterparts an octave lower, which are called simple intervals. The 9th interval, for instance, is a compound 2nd (a 2nd plus an octave) and is likewise major in quality.

Compound intervals do not obey the rules of normal arithmetic. Ordinarily, 8 + 5 = 13 but adding a fifth to an octave gives not a 13th but a 12th. This is because the note at the top of the octave is repeated as the note at the bottom of the 5th. We only need to include it once in the compound interval of a 12th.

Compound intervals can have all the qualities (diminished, minor, major, augmented, perfect) we have already met with smaller intervals.

The 10th and 12th are harmonically like the 3rd and 5th, respectively, of a triad. However, the 9th, 11th, and 13th don't correspond to any intervals in a triad. See also extended chord.