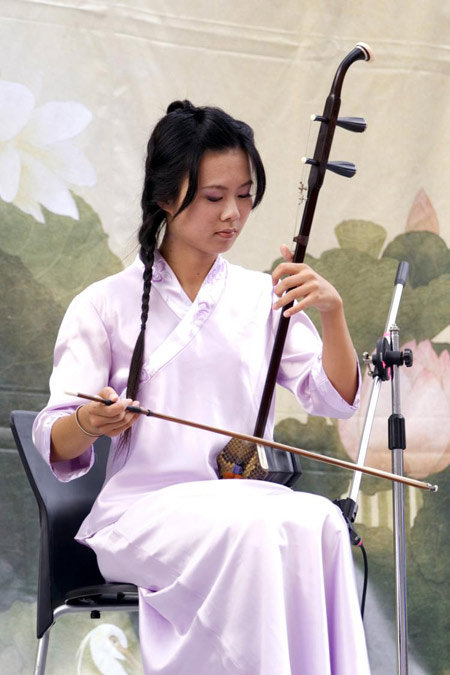 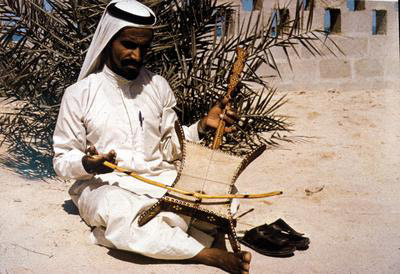 Fig 2. A Bedouin playing the rabab.

Fiddles, generically, are bowed lutes. The term 'fiddle' denotes a stringed instrument with a neck, bearing strings that are sounded by the use of friction rather than plucking or striking.

In almost all fiddles the world over, friction is provided by a bow strung with rosined horsehair. The hair is tensioned by the springiness of the bow, or held in tension by the fingers of the player, or by tightening a screw mechanism.

The most common playing position for fiddles is to hold them not under the chin like a violin, but vertically, with the soundbox resting either on the knee or the ground, and bow them in a cello-like fashion (the bow-hand palm facing variously upward or downward). A few of the smaller ones are held horizontal on the arm, and a very few are played with the soundbox resting on the shoulder, the neck downward, and the strings stopped with the joints of the fingers of the left hand, held palm-inwards.

Spike-fiddles are essentially spike-lutes that are bowed instead of plucked. These instruments are found all over China. The most common is the erhu, a member of the huqin family (Fig 1). It has a small soundbox, cylindrical, hexagonal, or octagonal in shape, open at the back, with a snakeskin soundboard supporting a small wooden bridge. Its thin stick-neck is cylindrical with no fingerboard, and has two large wooden friction-pegs at the top. Below this, the two strings run through a loop of silk or nylon to form an adjustable nut, then onwards across the bridge to the stub of the spike. The strings between the two strings, which are normally tuned to a perfect fifth apart – one feature that is significantly different from western fiddles.

The zhuihu or zhuiqin is descended from the Chinese lute sanxian, with the strings stopped by being pressed down on a flat fingerboard on its neck. Japan's four-stringed kokyu is likewise a bowed version of that country's lute, the shamisen, with a rounded-rectangular soundbox and neck bearing a fretless fingerboard, played with an unusually long bow.

Other countries of East and Southeast Asia and Indonesia have spike-fiddles closely related to the huqin family. Korea has the haegum, Japan the kokin, Tibet the piwang, Tuva the four-stringed byzaanchy. Vietnam's equivalents are the dan nhi or dan co and the deeper-pitched dan gao or dan ho, and Cambodia's include the tro u, larger tro sau and, with bow-hair not passing between the strings, the three-stringed tro khmer. The Okinawan kucho, traditionally three-stringed, has recently gained a fourth. Thailand's saw u and saw duang are very like an erhu, but the three-stringed saw sam sai is a rather different shape, with a rounded-triangular soundbox and long lower spike.

Indonesia also had spike-fiddles, which include the chunky two-stringed geso-geso and an elegant long-spiked fiddle, rather like the saw sam sai, having a rounded-triangular soundbox and extremely long turned tuning-pegs, known as a rebab (a fiddle-name found commonly in Arabic and other Islamic countries); a similar one is also used with gamelan orchestras in Java.

The Bedouin, Syrian and Jordanian one-stringed rabab or rababah has a more- or- less rectangular skin-covered soundbox, often with extended wooden side-pieces making an 'H'-shape with the soundbox as crossbar (Fig 2). The Ethiopian masenqo's square soundbox is set diamond-wise, while many other African one-string fiddles such as the Senegalese-Gambian riti or nyanyere, Rwandan iningiri, Burkina Faso duduga and Kenyan and Ugandan siiriri or orutu, have circular, usually gourd soundboxes.

In Tunisia and Morocco the name rabab signifies a different kind of fiddle, with no evident spike; it has a wedge-shaped combined soundbox and neck, with skin over the wider lower half and metal or wood with incised decoration covering the neck part, and a back-angled peg-box.

The construction of the foremost of its bowed relatives is the sarangi, which makes one of the most evocative and voice-like sounds of north India and Pakistan. It is a squat, chunky fiddle, carved from a single piece of wood, with a goatskin soundboard, a very wide neck and a hefty peg-box. From the back of the soundbox appears hemi-cylindrical, but the sides of the front are scalloped to make a waist.

The gut playing strings are, as with many such fiddles, stopped without being pressed on a fingerboard – here, though, the surface of the nails and the skin immediately above them are used. Their sound is given a silvery reverberation by sympathetic strings, which in present-day 'concert' sarangis number about 35. The three melody strings, usually joined by a drone string, run over the bridge to the peg-box, while the sympathetic strings run under the bridge – most of them to rows of tuning pegs inserted in the side of the neck, but some to extra pegs beyond the melody peg-box via a pair of flat bridges adjusted to make the strings buzz like those of a sitar.

In appearance like typical plucked lutes, but bowed, are the setor, sato or satar of Uzbekistan, Tajikistan and the Uighur people of western China. These have a teardrop-shaped, wood-fronted soundbox, one melody string and up to 12 sympathetic strings. The almost mandolin-like Uighur kushtar has sympathetic strings and a scalloped-sided front to its teardrop-shaped soundbox. The Turkish tambur, which has a nearly circular soundbox, wooden soundboard, and neck with fingerboard and tied frets, was usually plucked but bowing it has become common.

The cello-length Mongolian spike-fiddle morin khuur ('horse-head fiddle' because of the shape of its head) has a trapezoidal soundbox whose skin soundboard is now replaced by a wooden one with f-holes. Its two strings are made of parallel (not twisted) horsehair – sometimes synthetic – one with more strands than the other. The Tuvan igil is equivalent, but its soundbox is usually small, shallow-bowled and leaf-shaped or polygonal, with a skin soundboard. Khakassia and Altai have the closely related yykh or ikili.

A significant new development in the technology of spike-fiddles can be found in the circular-bodied instruments called tarhu, made by Australian luthier Peter Biffin. There is no soundboard in the usual sense – one foot of the bridge rests very lightly on the apex of a rear-facing wooden cone inside the body, while the other rests on the front of the body, taking the string pressure and acting as a pivot. The result is an extremely efficient transfer of string vibration and thus great volume and extraordinary richness of tone.

In the area of former Yugoslavia the instrument of the guslars – bardic ballad-singers – is the gusle, a single-stringed spike-fiddle with a skin soundboard on a teardrop shaped body, and cylindrical neck without fingerboard, usually ornamented at the top by a carved goat or other animal head. Albania has a similar instrument, the lahuta.

On the Dalmatian coast a small three-stringed lijerica or lirica is played. This is flask-shaped in outline, with three gut strings running straight from pegs on a disc-shaped head to a flat bridge, and from there to an anchor-point on the bottom end. There are two 'D'-shaped sound holes in the wooden soundboard, one on each side of the bridge. The latter rests partly on the soundboard, but one end of it presses on a removable soundpost that goes through a D-hole to rest on the back of the soundbox.

The instrument is held vertically and all three strings are bowed together – two acting as drones while the melody string is stopped from the side with the fingertips; there is no fingerboard. The lira of Calabria, at the southern tip of mainland Italy, is similar.

The Pontic lira is a slim bottle-shaped lira with a fingerboard upon which its three steel strings, tuned in fourths, are stopped. Like the violin it has a nut, and its bridge rests on the face of the soundboard, over an internal sound-post.

Norway's hardingfele or hardanger fiddle is the shape of a violin, though with a slightly shorter neck and decorated with pen-drawn acanthus patterns, mother-of-pearl inlays and figuratively carved head. What makes it different, though are two features: the fingerboard and bridge are much flatter than a violin's making bowing of more than one string the norm – producing a drone effect – and the fact that it is enhanced to a silvery ringing by the presence of four or five sympathetic strings that run under the bridge to extra pegs in the pegbox.

Among today's Swedish folk fiddlers there is increasing use of a larger sympathetic-strung instrument, usually called a drone-fiddle, based on the viola d'amore. Other European regional violin relatives include the three-stringed, nearly flat-bridged viola and three-stringed bass played in the fiddle music of Hungary, Romania and other parts of Eastern Europe, and the zlobcoki, a slim pocket-violin used by Polish highlanders in the Tatra mountains. Transylvania's utogardon is cello-shaped, but its strings are alternately hit with a stick and plucked for percussion.

The phonofiddle or Stroh violin is, for the player, just like an ordinary violin. However, it has no soundbox –- the vibration of the strings passes via the bridge to resonating metal and thence to an amplifying horn pointed at the audience. There is usually a second horn directing sound pointing at the player's ear. These instruments continue to be made and played. including by fiddlers in some of Eastern Europe's Roma bands.