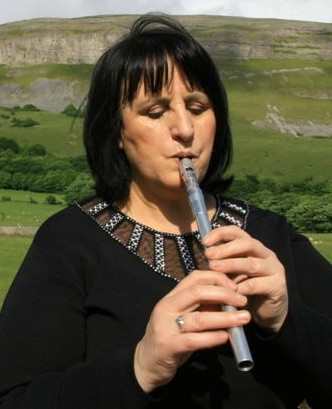 Carmel Gunning, one of Ireland's most accomplished players of the tin whistle.

The flageolet is any of a large family of old instruments that are end-blown flutes. Similar in design to a recorder, they consist of a mouthpiece and a main body, with finger and thumb holes, traditionally made of ebony, ivory, or boxwood. The invention of the flageolet is ascribed to Sieur Juvigny in 1580.

The English flageolet, with six holes in the front and sometimes a single thumb-hole at the back, has the same scale as the flute and was popular in England during the 17th century for pastoral music. Both George Handel (1685–1759) and Jean-Philippe Rameau (1683–1764) used the flageolet and Mozart wrote for it in his opera Die Entführung aus dem Serail (1782).

The French flageolet, which at one time was very popular in dance music, is a smaller variety, having only four holes in front, with two behind for the thumbs, and additional keys. Its compass is a little over two octaves from G on the treble stave.

In additional to the standard flageolet, there was a double flageolet, which had two bodies joined to a single instrument – one operated by the left hand, the other by the right. This allowed simple melodies to be played in thirds and also gave access to a wider range of pitches than the single flageolet.

In 1843, Robert Clarke invented a cheap flageolet that became known as the tin whistle or penny whistle. This became very popular in Ireland, where it remains a favorite in performances of folk music.