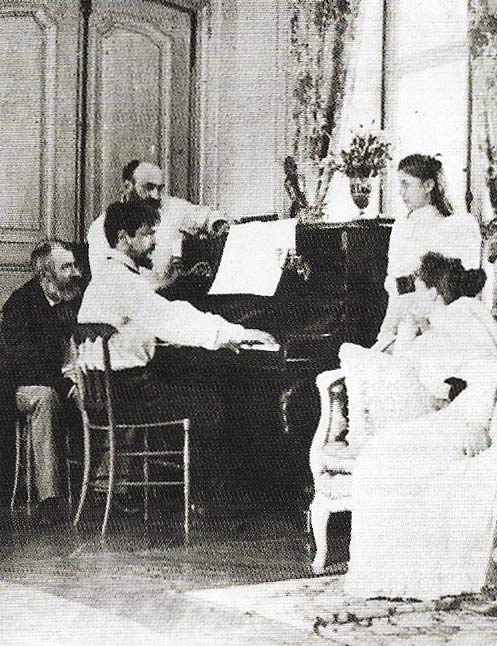 Impressionism is a term originally introduced in the 1870s in connection with the painters of a 19th-century French school (Monet, Manet, and others) in which the picture, instead of recording a mass of details, instead records what a quick glance can take in. In practice this results in the representation of the play of light upon objects rather than the objects themselves – tints and tinges rather than shapes. By analogy the term has been applied to the type of music in which brief musical ideas merge and change to create the effect of a dreamy vagueness. Debussy, a great admirer of the work of the impressionist painter Whistler, was an important composer of this style. In Impressionist music, texture and timbral exploration were also important features, including use of whole tone and pentatonic scales, parallel chords, and unresolved discords.)

The painting Impression Sunrise (1872) by Claude Monet (1840–1926), suggested toa critic the name of one of the most influential artistic movements in history. "Impression" implied a contourless and incomplete style of painting, as opposed to the prevalent highly detailed approach. A century earlier, Scottish philosopher David Hume (1711–1776) had defined "impression" and "idea", two basic types of perceptions: impression is the lively yet vague one "when we hear, or see, or feel, or love, or hate, or desire, or will".

Applied to music from around 1880 – particularly that of Emmanual Chabrier (1841–1894) and Claude Debussy (1862–1918) – the term connects to the visual arts. In Debussy's orchestral music, his innovative orchestration techniques create a lush and somewhat blurred effect, evoking an intimate and mysterious atmosphere. Many titles of Debussy's works, such as La Mer (The Sea, 1905) and Nuages (Clouds, 1899), related to impressionistic motifs from the visual arts. Others, such as the Javanese-inspired Pagodes (Pagodas), conveyed impressions of exotic places. The early impressionists also partly abandoned major/minor mode tonality in favour of a freer approach incorporating mediaeval church modes and other scales.

Consideration of the orchestra as a palette of sound colors would have a profound impact on later composers. Including Igor Stravinsky and Olivier Messiaen, and also on composers of movie scores, including John Williams. Impressionistic techniques lend themselves particularly well to the movie medium, in which music often supports the image, and vice versa, emphasizing orchestral colors rather than melodic themes. Impression's influence was also striking in jazz, especially in the use of modal scales for improvisation from the 1950s onward, but also in the Debussy-like lyricism in the music of pianists such as Bill Evans.