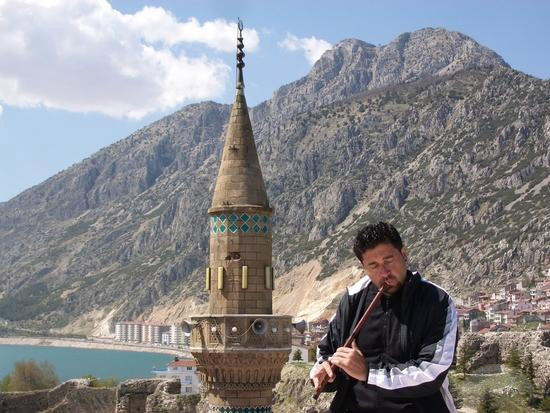 Ney, nai, or nay is an old Persian word for reed, and that – or other members of the grass family such as bamboo – is what most of the Middle Eastern, Turkish, and North African end-blown flutes of that name are made from. Unlike the panpipes, where the breath-stream is aimed at the far edge of the rim, with a similar embouchure (mouthpiece) to the transverse flute, to play an end-blown, open-ended flute one puts the end in the corner of the mouth, holding the flute at an angle of about 30 degrees to the body's vertical axis, and blows at the side of the rim, which entails an embouchure more like whistling. The rim is sharpened to make it thinner. Sometimes, on the longer neys, where the playing position is awkward, it is surrounded by a lip-disk.

The main exception to this method of embouchure is the Iranian ney, for which the rim is placed inside the mouth, hooked into the gap between the front teeth, and air directed by the teeth and tongue. This can be tricky, but gives a particularly wonderful, expressive breathy tone.

Neys commonly have between five and seven finger holes in the front and a thumb hole at the back. In North Africa the same instrument also goes under names including nira, talawat, gasba, qasaba, although the latter three can also refer to a short ney with six finger holes and no thumb hole, known in Egypt as a salameyya.