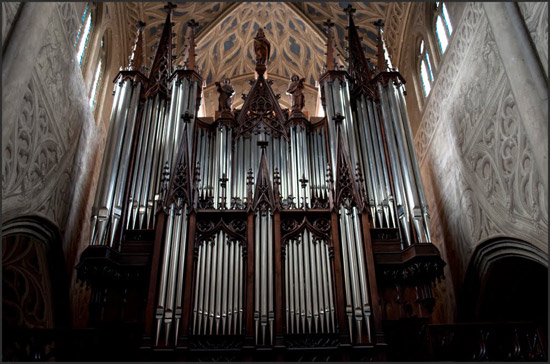 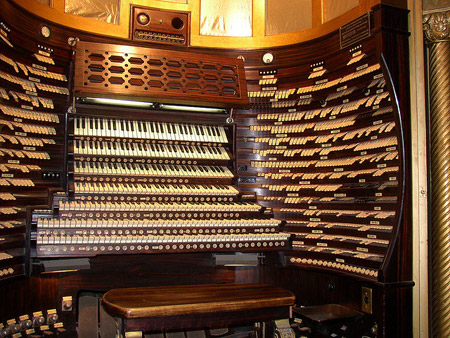 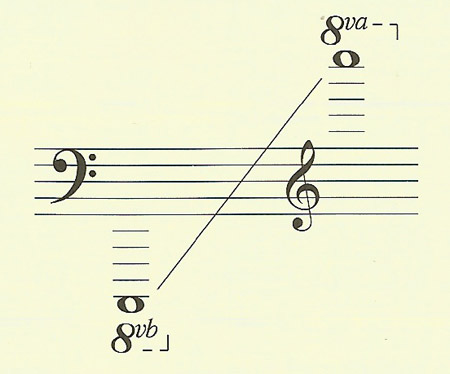 The pipe organ varies enormously in range since each instrument is tailored to its setting. The potential range is vat, however, capable of stretching from C''–c'''''.

The organ is an instrument of extremes – the biggest, the loudest, the lowest, the highest, the oldest, the newest, and the most complex. It is also among the smallest, the most intimate, the most modest, and the simplest.

The aptly named portative organ – much played from the twelfth through the sixteenh centuries – rested comfortably on the player's lap, while being pumped with the left hand and played by the right. Slung from the neck by a strap, it could even be played in transit, like the bagpipes.

In Atlantic City's Boardwalk Hall Auditorium, by contrast, there is the largest organ ever built. A deaf and vibration-insensitive tenant could live inside it, walking the length of several city blocks each day without retracing a single step. Equipped with two giant consoles, one with seven manuals, the other with five, it has 1,225 'speaking' stops and 33,000 pipes. The wiring on the instrument, if stretched out, would encircle the Earth twice over.

Between these extremes, the variation is enormous. Such extravagances were not just typically vulgar examples of the twentieth century. In the city of Winchester, England, more than 1,000 years ago an organ was raised that had 26 bellows, worked by 70 strong men 'laboring with their arms, covered with perspiration, each inciting his companions to drive the wind up with all its strength, that the full-bosomed box might speak with its 400 pipes.' It was played by two organists on two keyboards each with 20 "sliders" (long wooden slats with holes, corresponding to those at the foot of the pipes), and its effect was such that 'everyone stops with his hands his gaping ears, being in no wise able to draw near and bear the sound'.

In 1429, more than 250 years before Bach's birth, the organ of Amiens Cathedral in France had 2,500 pipes, the lowest of which were the sequoias of their kind.

Though among the most complex of instruments, the organ is also among the oldest, reaching back more than 2,000 years. The earliest-known example is the hydraulus of 250 BC, a highly refined, mechanically advanced Greek invention, in which the air column was regulated by water pressure. The first exclusively bellows-powered organ followed some 400 years later. By the 8th century, organs were being built in Europe, and by the 10th century, their association with the church had been established.

Despite its great antiquity, the underlying principles of the organ remained essentially unchanged between AD 250 and the advent of electronic instruments in the 20th century. The usefulness of electricity has by no means put a stop to traditional methods, which are still much preferred by the majority of organists.

Alone among instruments, the tone of the organ can be sustained indefinitely and unchangingly, merely by depressing a key and holding it down. The force or implement used to depress the key is irrelevant to the sound produced. Prior to the advent of certain electronic instruments, the organ, in all its many forms, was (and normally remains) the least touch-sensitive of all instruments. At its grandest, it is also the loudest.

If the basic principle of organ mechanics is essentially a simple one, its ramifications and development over two millennia are both very many and highly complex. The mechanism consists of the following:

The pipes are of two basic kinds:

The sole determinant of pitch is the length of the pipe. A demonstration of the same phenomenon can be achieved by blowing across the tops of bottles containing different amounts of water. The mechanics of the organ take the effort out of blowing and never runs out of breath.

The pipes are arranged over a 'wind chest', connected to the keys through a set of valves and supplied with air by means of bellows, mechanically or electrically controlled. Each rank, or set of pipes, is activated by a stop connected to a slider in the same manner as they keys are to the pipes. For a pipe to 'speak', the holes in the slider must be aligned with the bottom, or 'foot', of the pipes. The depression of a key opens the valve under a pipe, allowing the air to travel along a narrow channel, on through the hole in the slider, and finally up into the pipe.

4-foot (an octave higher), and so on. Some stops (known as mutation stops) produce a different pitch altogether, for example a stop marked as '11/3' would sound two octaves and a perfect fifth higher. Other stops – 'mixtures' – combine a number of different ranks at different pitches to produce an entire chord (comprising, usually, a number of the harmonics of the relevant note) when a single key is depressed. Excluding such aberrations as the Atlantic City organ, the pipes will tend to range from 10 meters (32 feet) to less than 2.5 centimeters (1 inch), giving the organ a wider compass than any other instrument (nine octaves, as opposed to the piano's seven).

The ranks are grouped into several separate sections called divisions. Each has a name and is controlled through its own manual on the pedal-board. Of the several manual divisions, the most common are the Great, Swell, and Choir or Positive. There is only one Pedal division. An organ, then, like an army, is organized quite literally, into separate divisions, each with its own manual and comprising a number of ranks, controlled by a single stop. However, a stop may also activate more than one rank or less.

Two manuals and pedals are the minimum requirement for playing the bulk of the legitimate organ repertoire. A large instrument, however, may have five, six, or even seven manuals, one banked above another, each controlling its own families of tones and pitches.

The greatest watershed in the 2,000-year history of the organ occurred in the twentieth century, with the advent of the electronic organ – a portmanteau term for organs whose tone is generated by electronic circuits and radiated by speakers in place of pipes. Their nearest ancestor was the American inventor Thaddeus Cahill's 200-ton, 60-foot, keyboard-operated Telharmonium, which used rotating, electromagnetic tone-wheels to generate the sound. Made in 1904, it soon lapsed, despite its bulk, into predictable obscurity. Its more modest successors, by contrast, were specifically designed as an economical and compact substitute for the traditional and more complex pipe organ.

The most famous of all electronic organs is known by the name of its inventor Laurens Hammond who patented it in 1934. Unlike most other instruments of its type, the Hammond organ produces its sound through a complex set of rotary, motor-driven generators, and is capable of a great variety of tone colors. In the 1960s, circuits and components design to operate television, radio receivers, and stereos were adapted to generate music. The great breakthrough, however, came in the 1970s, when digital microcircuitry was used to create a computer organ in which sounds are not created internally but have been prerecorded and stored in the computer from which they can then be retrieved at will. Musical tones recorded from conventional pipe organs are coded in digital form and can be recreated by computer at the touch of the keys and stops.