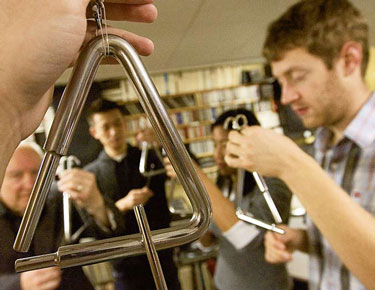 The triangle comprises a slim steel bar, circular in cross-section, bent into an equilateral triangle, 18 centimeters (7 inches) each side, with one corner open. It is played with a metal rod, and is suspended from a loop of string. The triangle was originally a sistrum – one of the oldest known percussion instruments. A sistrum is a "U"-shaped metal frame with a number of bars and prongs attached to it, which hold metal jingles, disks, and rings that clatter together as the instrument is shaken. Sistra first appear in the archeological record in ancient Egypt, Sumeria, and Babylonia in 2500 BC, and are found in Malaysia and Melanesia. The triangle as we know it today first appeared in Europe in the late fourteenth century, at which time it was a triangle-shaped sistrum with rings attached.

The orchestral triangle – without rings – appeared in the nineteenth century, and was used to provide a sparkle to orchestrations such as Franz Liszt's (1811–1886) Piano Concerto No. 1 (1853) and in "Anitra's Dance" from Peer Gynt (1876) by Evard Grieg (1843–1907). Classical composers included the triangle to create Turkish effects, but this may well have been a triangle with jingles attached, which could be shaken and struck.

Although it is a simple instrument, the triangle is tricky to play well. It produces a range of tone colors. The purest sound is produced by striking it as close to the top corner as possible, which requires the player to take very good aim to hit a small playing zone. Playing more complex rhythms requires the use of two beaters, and care must be taken to stop the triangle twirling round on its string with each strike of the beater. It can be suspended from the player's outstretched finger and played open and closed (damped), the damping being done by the other fingers in the hand. A roll or tremolo is played either by playing a single stroke roll with two beaters, or, more commonly, by moving the end of the beater rapidly side to side inside one corner.