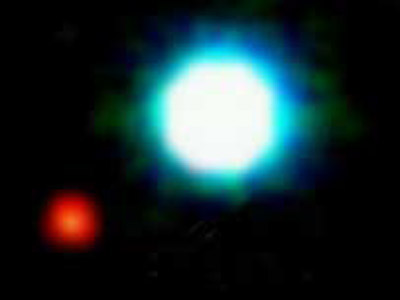 2M1207 is a brown dwarf around which orbits the first exoplanet ever to be directly photographed. 2M1207 (full catalog designation: 2MASSWJ1207334-393254) lies in the constellation Hydra at a distance of 228 light-years. Its companion planet, known as 2M1207b, is about five times the size of Jupiter and is orbiting at a distance nearly twice as far as Neptune is from our Sun.

Given the rather unusual properties of the 2M1207 system, the giant planet most probably did not form like the planets in our solar system. Instead it may have formed the same way our Sun formed, by gravitational collapse of a cloud of gas and dust. A team of European and American scientists working with the Very Large Telescope of the European Southern Observatory initially released a picture showing the planet in Sep 2004. Further images, taken in 2005, confirmed the nature of the object.