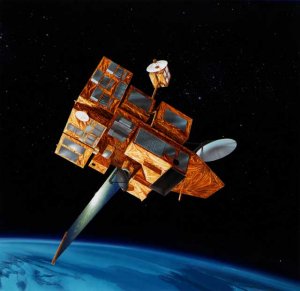 ADEOS (Advanced Earth Observing Satellite) was a series of two Japanese Earth resources satellites. ADEOS 1, also known by its national name Midori meaning "green," was the first resources satellite to observe our planet from space in an integrated way. Developed and managed by Japan's NASDA (National Space Development Agency), it carried eight instruments supplied by NASDA, NASA, and CNES (the French space agency) to monitor worldwide environmental changes, including global warming, depletion of the ozone layer, and shrinking of tropical rainforests. Due to structural damage, the satellite went off-line after only nine months in orbit.

ADEOS 2 continued where its predecessor left off, but also studied the global circulation of energy and water. It contributed to NASA's EOS (Earth Observing System) by carrying NASA's Seawinds scatterometer, a microwave radar to measure near-surface wind velocity and oceanic cloud conditions, which scientists hoped would improve their ability to forecast and model global weather. However, all communication with ADEOS 2 was lost in Oct 2003, probably as a result of heightened solar flare activity at the time. Its active lifetime had been roughly the same as that of its predecessor. See also Japan in space.