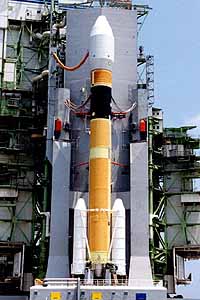 The H series is a family of Japanese launch vehicles used by NASDA (National Space Development Agency) which consists, in chronological order of development, of the H-1, H-2, and H-2A and their variants. The H-1 was a license-built version of the US Delta rocket, whereas the H-2, H-2A, and H-2B are entirely Japanese in design and construction.

The first stage of the H-1 was essentially the same as that of the N-2 (see N series) with a liquid oxygen (LOX)/kerosene main engine and 6-9 small solid-propellant strap-on boosters. The second stage was of Japanese origin, built by Mitsubishi Heavy Industries, and burned LOX/liquid hydrogen. A small solid-propellant third stage designed by Nissan enabled payloads of up to 1,100 kg to be placed in geostationary transfer orbit (GTO). The H-1 program was operational between 1986 concluded in 1992 with nine successes and no failures.

To provide greater payload capacity and to permit unencumbered commercial space transportation offerings (the Delta licensing agreement restricted the use of the H-1 for commercial flights), Japan developed the H-2 launch vehicle based on all-Japanese propulsion systems. The H-2, which made 7 successful flights between 1994 and 1999, could lift payloads four times heavier than those of the H-1 – up to 10 tons into low Earth orbit (LEO) or up to 4 tons in GTO – and opened the door to NASDA spacecraft designed to explore the Moon and planets.

The first mission, on February 3, 1994, deployed one payload into LEO and then carried an experimental package VEP (Vehicle Evaluation Payload) to GTO. Dwarfing its predecessor, the H-2 consisted of a two-stage core vehicle, burning LOX and liquid hydrogen in both stages, with two large solid-propellant strap-on boosters. Nissan produced the 4-segmented strap-on boosters which are considerably larger than the main stages of ISAS's (Institute of Space and Astronautical Science's) M-3 and M-5 vehicles (see M series). The LE-7 first-stage main engine overcame numerous developmental difficulties, while the LE-5A engine used by the second stage is an upgraded version of the proven LE-5 flown on the second stage of the H-1.

An upgraded version of the H-2 currently in service; the first H-2A was launched successfully launched from Tanegashima on August 29, 2001. Intended to compete commercially on the world market, the H-2A builds upon its predecessor and incorporates a simplified design and upgraded avionics and engines. Although the core vehicle is similar to the H-2's, the H-2A uses new solid and liquid boosters to improve payload performance. Between 2001 and March 2009, the H-2A was successfully launched 14 times; one H-2A failed to orbit a pair of spy satellites during a 2003 flight.

The H-2B takes advantage of parts proven by the less powerful H-2A. It uses a larger, "widebody" first stage with a diameter of about 17 ft – 4 ft more than the H-2A's first stage. The widebody stage houses larger propellant tanks that feed dual hydrogen-fueled LE-7A main engines. (The H-2A first stage is powered by an identical single main engine.) The H-2B's second stage and solid rocket boosters are unchanged from the designs used by the H-2A rocket. The first launch of the H-2B is tentatively scheduled for September 2009.