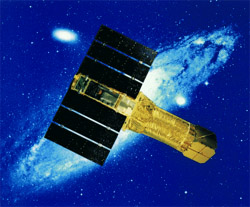 ASCA (Advanced Satellite for Cosmology and Astrophysics) was Japan's fourth X-ray astronomy mission, launched by ISAS (Institute of Space and Astronautical Sciences), and the second for which the United States provided part of the scientific payload. This included four grazing-incidence X-ray telescopes, developed at the Goddard Space Flight Center, each of which worked in the energy range 0.7–10 keV. After eight months of instrument validation, ASCA became a guest-observer project open to astronomers in Japan, America, and ESA (European Space Agency) member states. Among its targets for study were the cosmic X-ray background, active galactic nuclei, galactic clusters, and supernovae and their remnants. ASCA was the first satellite to use CCDs (charge-coupled devices) for X-ray astronomy. It is also known by its national name, Asuka, which means "flying bird," and prior to launch was called Astro-D.