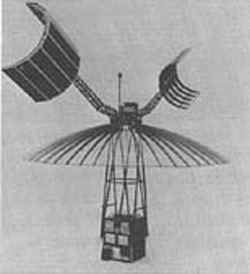 ATS (Applications Technology Satellite) was a series of NASA satellites designed to explore and flight-test new technologies and techniques for communications, navigation, and weather satellites. Among the areas investigated during the program were spin stabilization, gravity gradient stabilization, complex synchronous maneuvering, communications experiments, and the GSO (geostationary orbit) environment. Although the ATS flights were intended mainly as test-beds, they also collected and transmitted weather data and worked at times as communications satellites.

ATS 1 took the first U.S. high-quality photographs of the Earth from synchronous orbit, showing the changing cloud-cover patterns. In addition to weather data, the satellite relayed color television across the United States and voice signals from the ground to aircraft in flight. ATS 3 carried advanced communications, meteorology, and navigation experiments and made high-resolution color photographs of one complete side of the Earth. ATS 6, as well as carrying out technology experiments, became the world's first education satellite, transmitting educational programs to India, the United States, and other countries. It was the first communications satellite with the power to broadcast TV photos to small local receivers. It also played a major role in docking during the Apollo-Soyuz Test Project. All the ATS missions were launched from Cape Canaveral.