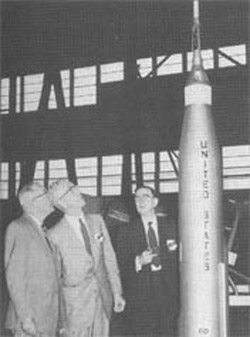 Ira Abbott, at the right.

Ira Abbott was a prominent aeronautical engineer in the early years of the American space program. After graduating from the Massachusetts Institute of Technology, Abbott joined the Langley Aeronautical Laboratory in 1929. The author of many technical reports on aerodynamics, he was instrumental in setting up programs in high-speed research, and by 1945 had risen to be assistant chief of research at Langley. Transferring to NACA (National Advisory Committee for Aeronautics) headquarters in 1948 as assistant director of aerodynamics research, he was promoted to director of advanced research programs at NASA in 1959 and to director of advanced research and technology in 1961. In this last capacity Abbott supervised the X-15, supersonic transport, nuclear rocket, and advanced reentry programs. In 1949, he coauthored with Albert E. von Doenhoff the reference book Theory of Wing Sections, which includes a summary of airfoil data. Abbott retired in 1962.