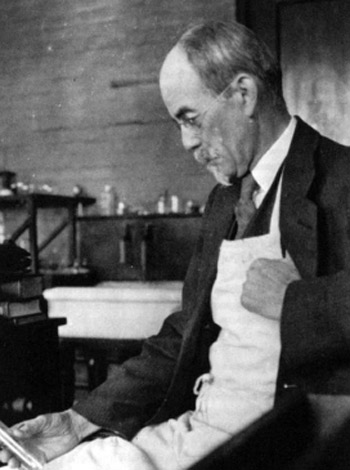 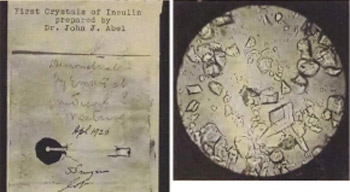 John Abel was an American biochemist, best known for his first identification (1898) of the hormone adrenaline (epinephrine). For much of his career he was professor of pharmacology (1893–1932) at Johns Hopkins University. He made his key discovery of adrenaline after many years of studying the chemical composition of body tissues, finally isolating the hormone from the suprarenal glands of sheep. Later, Abel isolated amino acids from blood by the process of dialysis. He was also the first to crystallize insulin and show that it was a protein.

Abel was born in Cleveland, Ohio, to George Michael and Mary (Becker) Abel who were both of German descent. He attended country schools in the neighborhood of Cleveland, graduated from the East High School of Cleveland in 1876, and entered the University of Michigan in the same year. At the end of three years he accepted the principalship of the Laporte (Indiana) High School, where he remained three years before returning to the University to complete his course and graduate in physiology and chemistry in 1883.

After pursuing postgraduate study at the universities of Johns Hopkins and Pennsylvania, he went to Europe and attended the University of Leipzig from 1884 to 1886, studying physiology under Carl Ludwig and Maximilian von Frey, histology under Wilhelm His, pharmacology under Rudolf Boehm, pathology under Adolf Strumpell, and inorganic and organic chemistry under Johannes Wislicenus. The winter of 1886–67 saw him in Strassburg doing internal medicine with Adolph Kussmaul and he received his MD there in 1888. This broad education gave him the background for his wide-ranging chemical research of the next 50 years. In 1890 he was offered a chair at the University of Michigan to establish a department of pharmacology but in 1893 joined the faculty at Johns Hopkins as the first full time professor of pharmacology, a position he occupied for the next 45 years.

In Dec 1925, Abel's mind-set changed completely when he was rewarded with "one of the most beautiful sights of my life": glistening insulin crystals forming on the sides of a test tube. Bioassay of these indicated a 10-15 fold purification of the starting material. His preliminary report appeared in the Proceedings of the National Academy of Sciences in February 1926 in which he reported that his crystals gave 'a beautiful biuret reaction' and reacted in other tests as a protein. The idea that a protein could have the unique pharmacological properties of insulin was unthinkable at the time and it is not clear when Abel accepted it.

Opponents claimed that the protein was simply a carrier for the active part of insulin (the adsorption theory) and a major problem for Abel in countering these criticisms is that between Mar 1926 and Jan 1927 he inexplicably lost his ability to crystallize it. He initially attributed this failure to the fact that Lilly had supplied him, without his knowledge, with a beef pork insulin mixture; in retrospect, the most likely explanation is that Lilly's insulins were too pure and did not contain enough of the natural zinc of the pancreas. This became apparent in 1934 when David Scott of the Connaught Laboratories in Toronto found that crystalline insulin contains zinc and that crystals from which the zinc has been removed cannot be recrystallized.


Pioneering work in dialysis and the artificial kidney

Able is regarded as one of the fathers of the artificial kidney. In 1913, he became interested in removing substances from the blood of living animals by dialysis and made an elaborate apparatus with which he could remove salicylic acid and other substances as efficiently as the native kidney. He also found amino acids in his dialysates, the first proof that they were present in the blood. He also did experiments with 'plasmaphaeresis' in which red cells were separated from the plasma and then reinjected. In the paper on this (1914) he suggested the possibility of blood banks.