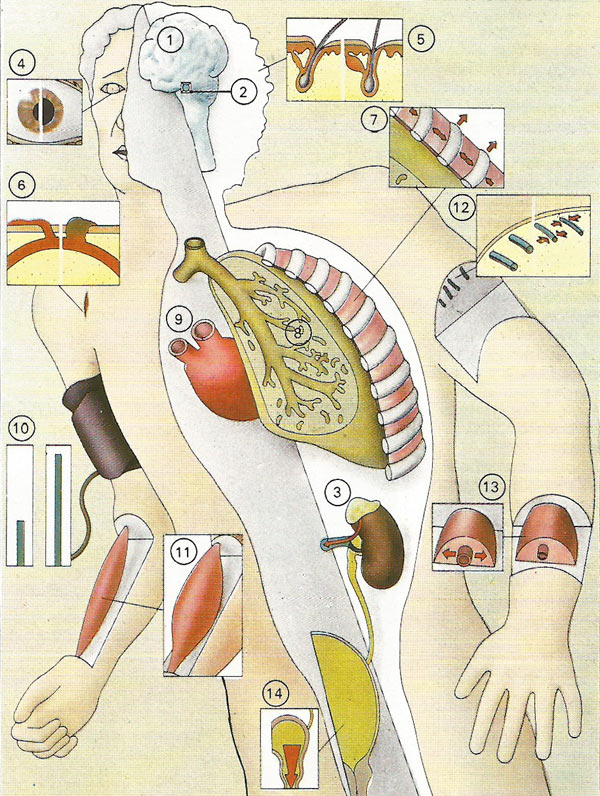 A vivid example of a hormone at work is the way in which adrenaline acts in response to fear, a powerful emotion that produces dramatic effects on the body as a whole. It is the sudden release of adrenaline from the adrenal medulla that meets the situation by mobilizing energy output and spurring the body to action. Specifically, fear triggers the following chain of events: (1) the frontal lobe is altered; (2) the hypothalamus of the brain orders the adrenal medulla into production; (3) there is a rapid release of adrenaline; (4) the pupils dilate; (5) hair stands on end; (6) blood readily coagulates; (7) the chest expands; (8) bronchioles dilate; (9) the heart dilates; (10) blood-pressure rises; (11) muscles contract; (12) skin capillaries constrict, causing pallor; (13) muscle blood vessels dilate; (14) the bladder evacuates.

Adrenaline is a hormone and neurotransmitter that, along with smaller amounts of noradrenaline, is secreted by the medulla of the adrenal gland and acts on the alpha and beta adrenergic receptors. Also known as epinephrine (especially in the United States), it makes the heart beat faster. It also makes the bronchi open and diverts blood from the skin and digestive system to the heart and muscles.

Adrenaline plays a central role in the short-term stress reaction – the physiological response to threatening or exciting conditions (fight-or-flight response). Synthetic adrenaline is used medicinally in some situations, especially in the resuscitation of patients in shock or following cardiac arrest.

Adrenaline was the first hormone to be discovered, by the American biochemist John JacoB Abel, who published his results in 1898.