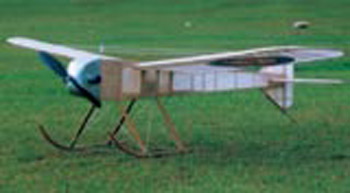 The Aerial Target (AT), along with the American Kettering Bug,was one the earliest experimental guided missiles. Designed by H. P. Folland with radio gear by Archibald M. Low, the AT took the form of a radio-controlled pilotless monoplane. This British project, begun in 1914 under the direction of Low, was deliberately misnamed so that enemy spies would think the vehicles were simply drones flown to test the effectiveness of antiaircraft weapons. In fact, AT concept vehicles were intended to test the feasibility of using radio signals to guide a flying bomb to its target.

Radio guidance equipment was developed and installed on small monoplanes powered by a 35-hp Granville Bradshaw engine. Two AT test flights were made in March 1917 at the Royal Flying Corps training school field at Upavon. Although both vehicles crashed due to engine failure, they at least showed that radio guidance was feasible. However, the AT program was scrapped because it was thought to have limited military potential.