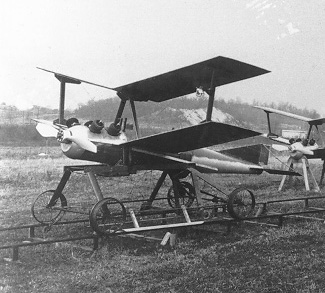 The Kettering Bug, along with the British A.T. (Aerial Target), was one the earliest guided missiles. Development of the Kettering Bug, under the direction of Charles Kettering, began at the Delco and Sperry companies in 1917. It was an unpiloted biplane bomber made of wood, weighing just 270 kg, including a 135-kg bomb as payload, and was powered by a 40-hp Ford engine.

Engineers employed an ingenious method of guiding the Kettering Bug to its target. Once wind speed, wind direction, and target distance had been determined, the number of revolutions the engine needed to take the missile to its target was calculated. A cam was then set to drop automatically into position when the right number of engine revolutions had occurred. The Kettering Bug took off using a four-wheel carriage that ran along a portable track. Once airborne it was controlled by a small gyroscope, its altitude measured by an aneroid barometer. When the engine had completed the prescribed number of revs, the cam dropped into position, causing bolts that fastened the wings to the fuselage to be pulled in. The wings then detached, and the bomb-carrying fuselage simply fell onto its target.

The Kettering Bug was successfully demonstrated in 1918 before Army Air Corps observers in Dayton, Ohio. However, World War I hostilities ended before the missile could be put into production.