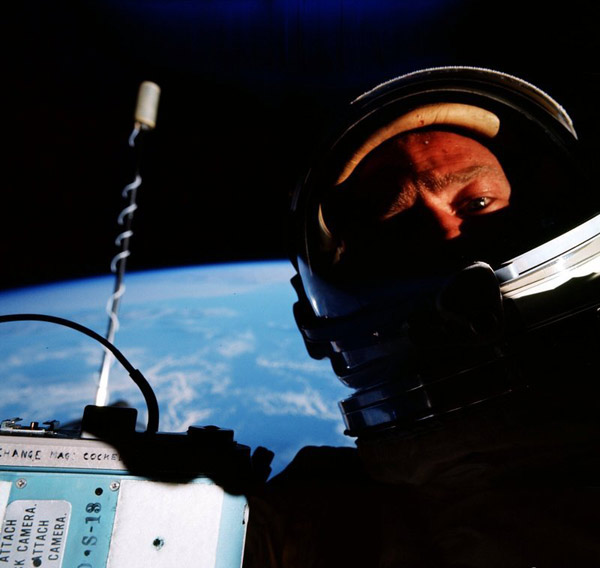 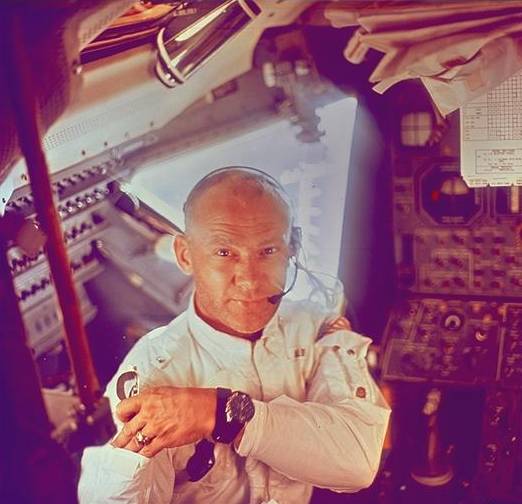 Aldrin aboard the Apollo 11 Lunar Module.

Edwin Aldrin is an American astronaut who became the second person to walk on the Moon. Aldrin graduated with honors from West Point in 1951 and subsequently flew jet fighters in the Korean War. Upon returning to academic work, he earned a PhD in astronautics from the Massachusetts Institute of Technology, devising techniques for manned space rendezvous that would be used on future NASA missions including the Apollo-Soyuz Test Project. Aldrin was selected for astronaut duty in Oct 1963 and in Nov 1966 established a new spacewalk duration record on the Gemini 9 mission. As backup Command Module pilot for Apollo 8 he improved operational techniques for astronautical navigation star display. Then, on Jul 20, 1969, Aldrin and Neil Armstrong made their historic Apollo 11 moonwalk.

Since retiring from NASA (in 1971), the Air Force, and his position as commander of the Test Pilot School at Edwards Air Force Base, Aldrin has remained active in efforts to promote American manned space exploration. He has produced a plan for sustained exploration based on a concept known as the orbital cycler, involving a spacecraft system that perpetually orbits between Earth and Mars. His books include Return to Earth (1974),1 an account of his Moon trip and his views on America's future in space, Men from Earth (1989),2 and a science fiction novel, Encounter With Tiber (1996). Aldrin also participates in many space organizations worldwide, including the National Space Society which he chairs.

Buzz Aldrin's mother's maiden name was Moon. Edwin acquired the nickname 'Buzz' when he was only a few months old, from his older sister Fay Ann, who was 18 months at the time. His family called him 'brother' but Fay Ann pronounced it 'Buzzer', which then eventually became Buzz. Aldrin made 'Buzz' his legal first name in 1988.