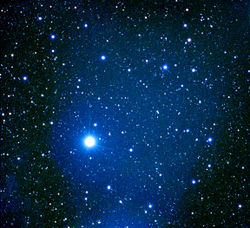 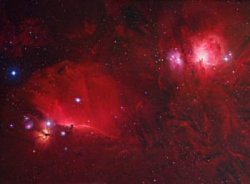 To the left is Alnilam. Below it and next to the Horsehead Nebula is Alnitak. In the upper right is the Orion Nebula. Photo: Robert Gendler.

Alnilam (Epsilon Orionis) is the central and brightest of the three stars in Orion's Belt and the fourth brightest star in the whole of Orion. Alnilam is a blue-white supergiant that for many years has served as a standard star against which to compare others. Its relatively simple spectrum also provides a useful background against which to study the gases of the intervening interstellar medium.

Like most supergiants, Alnilam is rapidly shedding mass. A powerful stellar wind blows from its surface at speeds up to 2,000 km/s, carrying way about two millionths of a solar mass per year (20 million times the rate lost by the Sun). Although only about four million years old, Alnilam is already fusing heavy elements in its core and is doomed to explode, in the next million years or so, as a supernova.

A molecular cloud, NGC 1990, surrounds Alnilam and is partly illuminated as a reflection nebula by the star's intense radiation.