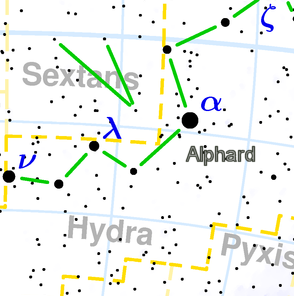 Alphard (Alpha Hydrae) is the brightest star in the constellation Hydra, made more noticeable by being in a fairly barren region of sky to the southwest of Regulus. Its Arabic name means "the solitary one."

Alphard is an orange giant and mild barium star with a companion that, before it became a white dwarf, contaminated its partner with the by-products of nuclear fusion that had been dredged to its surface.