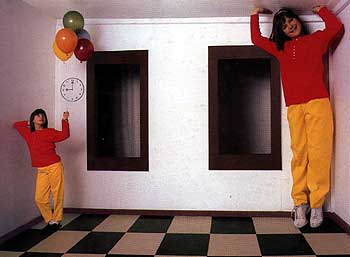 The Ames Room is a famous distorted room illusion, named after the American ophthalmologist Adelbert Ames, Jr. (1880–1955), who first constructed such a room in 1946 based on a concept by the German physicist Hermann Helmholtz in the late 19th century.

The Ames room looks cubic when seen with one eye through a specially-positioned peephole; however, the room's true shape is trapezoidal. The floor, ceiling, some walls, and the far windows are trapezoidal surfaces; the floor appears level but is actually at an incline (one of the far corners being much lower than the other); and the walls are slanted outward, though they seem perpendicular to the floor. This mistaken shape makes it look as if people or objects grow or shrink as they move from one corner of the room to another.