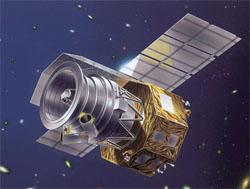 Astro-F was the second infrared astronomy mission of Japan's ISAS (Institute of Space and Astronautical Science). Astro-F (see Astro- series) uses a 68.5-cm-diameter telescope, served by two infrared detectors and cooled to -267°C using liquid helium, to carry out a highly sensitive survey of the infrared sky from 1.7 microns (near-infrared) to 180 microns (far-infrared); its observations will astronomers investigate further the formation and evolution of galaxies, stars, and planets. The spacecraft has a mass of 960 kg.

Astro-F, formerly known as IRIS (Infrared Imaging Surveyor), was under development since 1997. After many delays, it was finally launched into a sun-synchronous, 745-km-high, polar orbit by an M-5 rocket from Uchinoura Space Center on February 21, 2006.