The legend of Atlantis 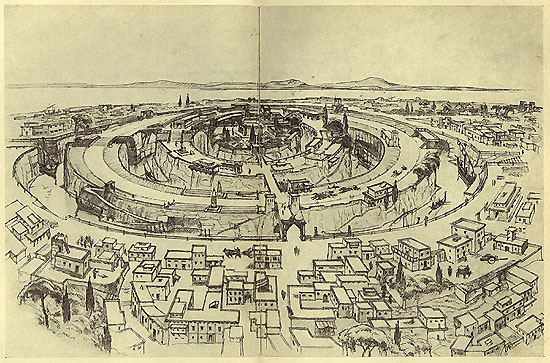 Reconstruction of the capital of Atlantis according to Plato's description, drawn by Walter Heiland in Albert Herrmann's Unsere Ahnen und Atlantis (1934).

Many fantastic stories from the past must have built up around natural phenomena that were beyond the power of people at the time to explain in rational terms. Dramatic reports from individuals who narrowly escaped a violent catastrophe of nature or who witnessed its effects from afar would have been eagerly seized upon by others and quickly exaggerated beyond all recognition. It seems at least possible that one the most fabulous legends of the western world may have come about in this way.

So much has been written and surmised about the "lost continent" of Atlantis in recent decades that it's easy to forget that the whole tale rests upon just one source of highly uncertain provenance: a description by Plato in his Timaeus and Critias. Plato claims, in these writings, that the story came to him by way of various intermediaries from his ancestor Solon who learned it, in turn, from Egyptian priests in 590 BC.

Some 9,000 years earlier, according to the legend, there was an island metropolis, roughly 32,000 square miles in area, lying beyond the Pillars of Hercules (the modern-day Straits of Gibraltar). It was dominated by hills and surrounded by two concentric rings of land, linked by bridges and roads. The water separating the rings formed extensive harbors connected by canals 150 feet deep and 500 yards wide. The vegetation was luxuriant, the land fertile and self-sufficient, and there were both hot and cold freshwater springs. Black, white, and red stones were quarried from beneath the central hill, leaving a natural roof for the inner harbor. The Atlanteans lived securely and comfortably in their island paradise – until, suddenly, disaster struck. According to Plato: "Through violent earthquakes and floods, in a single day and night of misfortune ... [the whole race] ... was swallowed up by the Earth and the island of Atlantis ... disappeared into the depths of the sea."

Aristotle, who, as a protege of Plato, was in a slightly better position than ourselves to judge, maintained that the whole story was a fabrication from beginning to end. It was dreamed up, he maintained, simply to provide a setting for some of Plato's social ideas. Certainly, the purported size of Atlantis, its location (west of Spain) and the extreme age of its civilization are completely at odds with modern geological and archeological evidence. Even so, there's at least some justification for suspecting that Plato may have based his tale on a core of fact – and a very interesting core at that.

On their island home of Crete, it seems that the advanced race of the Minoans lived an almost idyllic lifestyle. Then, in the 16th century BC, something brought it to an abrupt and mysterious end. The collapse of Minoan power was cataclysmic – a fact testified to by the apparently simultaneous destruction and burning of many of the major Minoan settlements, both on Crete itself and on the much smaller, volcanic island of Santorini (known to the Greeks as "Thera"), 80 miles to the north. The Minoans had been overwhelmed, seemingly without warning – but by what?

In 1939, the Greek archeologist Spyridon Marinatos pointed the finger of suspicion at Santorini Three and a half millennia ago, the little island's volcano erupted spectacularly in an event estimated to have been at least four times as violent as the tremendous explosion of Krakatoa in 1883, and to have thrown out between three and four cubic miles of material. Traces of ash from this titanic blast have been found on Egypt's northern coast, in peat-bogs in Ireland, and in ice core samples taken from as far away as Greenland.

Dust thrown up by Santorini's eruption would have spread all around the northern hemisphere and remained in the atmosphere for many months, partially blocking the heat from the Sun. As a consequence, average surface temperatures would have dropped over a wide area. Evidence of this global cooling has been found in the growth rings of bristle-cone pines in California. Only one instance of significant frost damage has been identified in the trees from the middle of the second millennium BC. In 1984, Valmore Lamarche and Katherine Hirschboeck of the University of Arizona put the precise date of the damage at 1627 BC – around the same time that Minoan culture is known to have collapsed.

Detailed investigations of the archeological sites on Santorini and Crete have enabled a picture to be built up of what might have happened. It seems that Santorini went through two bursts of activity within a short period of time. In the first, huge quantities of ash were thrown out. A layer two inches deep has been found on eastern Crete and much deeper deposits on Santorini. However, the archeological evidence shows clearly that Minoan culture at the eastern end of Crete (there were few major population centers in the west) survived this initial explosion, whereas towns and cities of central Crete, where very little ash fell, were effectively wiped out. A strong possibility is that earthquakes, triggered by the movement of molten rocks beneath the surface, devastated settlements in central Crete immediately prior to the eruption. The extensive fire damage evident in the remains could have happened because oil lamps, dislodged by the powerful tremors, set building debris alight. Olive oil leaking from broken storage vessels in the large basements of the palaces and country houses would perhaps have further fueled the inferno.

Away from the center of destruction, Minoan life appears to have continued more or less unaffected, possibly for another 15 or 20 years. But then came the final hammer blow. In a second outburst, even more violent than the first, Santorini's volcano blew itself apart, virtually destroying the little island and leaving a deep caldera into which the blue waters of the Aegean flowed. More earthquakes almost certainly accompanied this event and these could have further damaged buildings in Crete already weakened by the earlier seismic activity. More ash and volcanic bombs would have rained down on the terrified Minoans, while dust in the atmosphere would have led to a temporary chill and a probable failure of crops. The most destructive force spawned by Santorini's death paroxysm, however, may well have been huge tidal waves, or tsunamis. Several unusual, thick sedimentary deposits on the seabed reveal that a devastating tsunami from Santorini was directed just to the west of Crete. Part of this would have slammed into the northern coastline, wrecking any ships in harbor together with the harbors themselves, thereby undermining what remained of the Minoans' once-powerful economy.

Was Plato's description of Atlantis based loosely on the real events which surrounded the Minoans and the ill-fated island of Santorini. We don't know. But the common theme of a surprisingly advanced culture and its termination by "violent earthquakes and floods" is suggestive. And it isn't difficult to be persuaded that the rapid, almost complete disappearance of Santorini – and the simultaneous ending of Minoan influence may have been the key event upon which the legend of Atlantis was built.