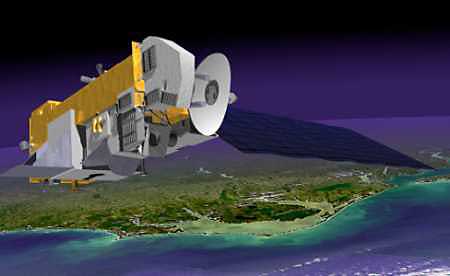 Aura is the third spacecraft in NASA's EOS (Earth Observing System) following Terra and Aqua. It carries four instruments that will provide global surveys of atmospheric trace gases, both natural and manmade, and their transformations. Temperature, geopotential heights, and aerosol fields will also be mapped from the ground through the mesosphere. Among its primary mission objectives, Aura will collect data on holes detected in the protective ozone layer at the poles.

The bus-sized, $785 million satellite, built for NASA by Northrop Grumman Corp., was successfully launched into a polar orbit by a Delta II rocket from Vandenberg Air Force Base on July 15, 2004. Four more US and French satellites should be launched over the next several years and take their places between the Aqua and Aura, forming a flotilla of environmental monitors that NASA has dubbed the A-Train. Aqua is expected to operate for at least five years. It was formerly known as EOS Chemistry 1.