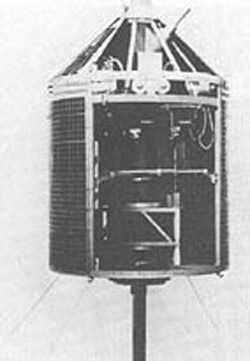 Azur was Germany's first scientific satellite. Azur studied the Van Allen belts, solar particles, and aurorae, and is named for the German for "sky blue".

A July 17, 1965 memorandum of understanding between NASA and the German Ministry for Scientific Research (BMwF) initiated a cooperative project that would orbit a German scientific satellite to investigate Earth's inner radiation belt. The agreement provided for the launch of the satellite after a successful series of sounding rocket tests to check out the proposed satellite instrumentation. NASA would provide the Scout launch vehicle, conduct launch operations, provide tracking and data acquisition, and train BMwF personnel. In June 1966 NASA designated the satellite GRS-A, an acronym for "German Research Satellite-A"."Azur" was chosen by BMwF in early 1968 as the name for the satellite, and GRS-A was officially designated Azur by NASA after launch. See also Aeros.