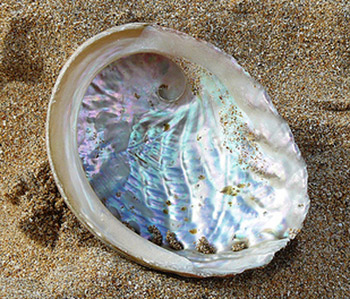 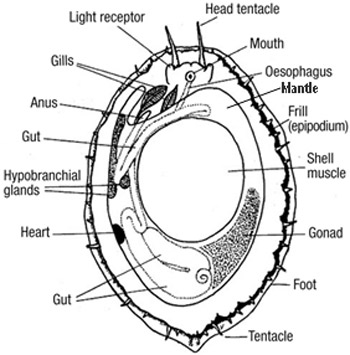 An abalone, or ormer as it is called in the UK, is an edible, herbivorous, marine sea snail. In terms of classification, abalone are univalve mollusks of the class Gastropoda (see gastropod), family Haliotidae. This family has only one genus Haliotis ("sea ear") and, according to the World Register of Marine Species, 57 different species. Abalone are found mostly in the Pacific and Indian Oceans and are harvested commercially for food consumption. The single, broad shell, which has a series of perforations near the edge and is lined with highly iridescent mother-of-pearl or nacre, is used for jewelry and other ornamental purposes.

The most conspicuous part of the abalone is the shell, with its row of respiratory pores. The muscular foot has a strong suction power permitting the abalone to clamp tightly to rocky surfaces. A column of shell muscle attaches the body to its shell. The mantle circles the foot as does the epipodium, a sensory structure and extension of the foot which bears tentacles. The epipodium projects beyond the shell edge in the living animal. The epipodium surface may be smooth or pebbly in appearance and its edge may be frilly or scalloped. It is the most reliable structure for identifying abalone species.

The internal organs are arranged around the foot and under the shell. The most conspicuous organ, the crescent-shaped gonad, is gray or green in females and cream colored in males. It extends around the side opposite the pores and to the rear of the abalone. The abalone has a pair of eyes, a mouth, and an enlarged pair of tentacles. Inside the mouth is a long, file-like tongue called the radula, which scrapes algal matter to a size that can be ingested.

The gill chamber is next to the mouth and under the respiratory pores. Water is drawn in under the edge of the shell, and then flows over the gills and out the pores. Waste and reproductive products are carried out in the flow of water. Since it has no obvious brain structure, the abalone is considered to be a primitive animal. However, it does have a heart on its left side and blood flows through the arteries, sinuses and veins, assisted by the surrounding tissues and muscles.

Female abalone can produce millions of eggs each year. These eggs are released into the water, where they are fertilized by sperm released by male abalone. The fertilized eggs hatch into organisms called larvae. After about a week (depending on water temperature) the tiny larvae develop into small juveniles (often called 'spat') and settle onto rocks.