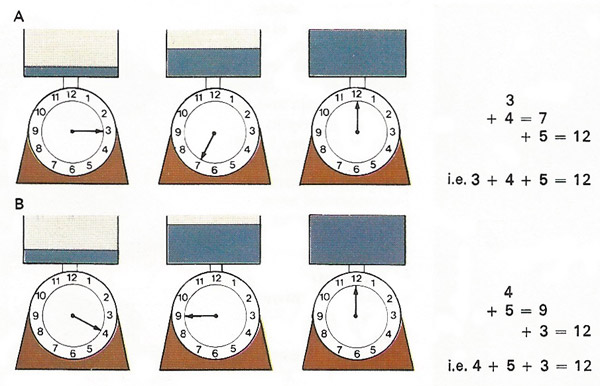 Addition is associative – that is, a series of additions can be carried out in any order without affecting the result. This diagram shows the effects of successively weighing [A] 3, 4, and then 5 units of a substance on a spring balance and [B] weighing 4, 5, and then 3 units. In both cases the total weight – the sum or the additions – is 2 units. As in many other mathematical laws, this is applied common sense.

Addition is one of the four fundamental operations of arithmetic. It is denoted by the sign '+'.

If fractions with unequal denominators are to be added they must first be brought to their least common denominator.

Identically-named numbers can be added (and subtracted) by adding the coefficients:

summands may be interchanged (commutative law):

With more than two summands, brackets may be inserted (associative law):

No further rule is needed for the addition of positive numbers:

to add one negative number to another, its absolute value is subtracted:


Addition of powers and surds

Powers and surds must be treated like literal numbers for the purposes of addition, e.g.,

In adding complex numbers the real and imaginary parts must be added separately, e.g.,