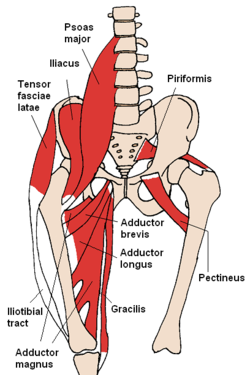 The adductor magnus and nearby muscles. Image source: Wikipedia.

One of the most powerful muscles in the thigh, the adductor magnus is large, thick, flat, and triangular-shaped, and consists of both adductor (see adduction) and hamstring (see hamstring muscles) portions.

The muscle fibers of the adductor portion diverge as they pass downward and laterally to be attached to the posterior surface of the femur from the quadrate tubercle above, along the linea aspera to the medial supracondylar ridge below. The fibers arising from the ischial tuberosity form the hamstring portion and are inserted below on the adductor tubercle on the medial condyle of the femur.

There is gap (adductor hiatus) in the attachment of the muscle to the medial supracondylar ridge, which permits the femoral vessels to pass from the adductor canal downward into the popliteal space.

The adductor magnus has a double nerve supply. The part inserted into the adductor tubercle is associated at its origin with the hamstrings; it belongs to the flexor group and is therefore supplied by the medial popliteal part of the sciatic nerve, the rest of the muscle – the true adductor part – is supplied by the posterior branch of the obturator nerve.

The adductor portion acts like the other adductor muscles – that is, it adducts, the thigh, rotates it laterally, and helps to flex the hip joint. The hamstring portion extends the hip joint.