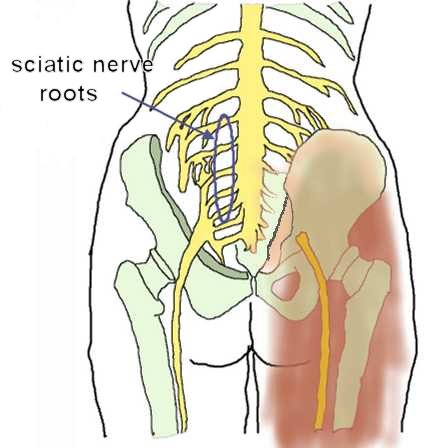 The sciatic nerve is a large nerve – one of the longest and strongest (capable of suspending 400 pounds) in the human body. It originates at the lower end of the spinal cord and runs down the middle of the back of the thigh to divide a few centimeters above the knee, the lateral peroneal division winding round the neck of the fibula to the front of the leg.

When the sciatic nerve becomes injured, inflamed, or infected, it may cause severe pain, known as sciatica, in the back of the thighs and the legs. In severe cases, sciatica can cause loss of leg reflexes or the wasting of muscles in one or both calves.


Detailed anatomy of the sciatic nerve

The sciatic nerve, a branch of the sacral plexus (L4 and 5; S1, 2, and 3), emerges from the pelvis through the lower part of the greater sciatic foramen. It consists of the tibial and common peroneal nerves bound together with fascia. The nerve appears below the piriformis muscle and curves downward and laterally, lying successively on the root of the ischial spine, the superior gemellus, the obturator internus, the inferior gemellus, and the quadratus femoris, to reach the back of the adductor magnus muscle. It is related posteriorly to the posterior cutaneous nerve of the thigh and the gluteus maximus. It leaves the buttock region by passing deep to the long head of the biceps femoris, to enter the back of the thigh.

Occasionally, the common peroneal nerve leaves the sciatic nerve high in the pelvis and appears in the gluteal region by passing above or through the piriformis muscle.

The sciatic nerve usually gives no branches in the gluteal region.