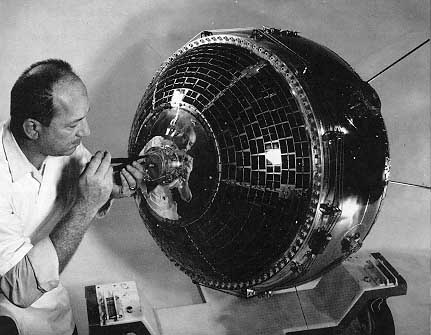 Explorer 32: an aeronomy satellite that measured temperature, composition, density, and pressure in the upper atmosphere. It was launched on May 25, 1966.

Aeronomy is the study of the upper atmosphere, especially its relationship to Earth and the effect upon it of radiation bombardment from space. It concentrates on the chemistry and physics of regions above the tropopause. Below the tropopause is the site of most weather phenomena, which is primarily the domain of meteorology.

Aeronomy research may be conducted by high-altitude scientific balloons, sounding rockets, and satellites. The science of aeronomy extends also to other planets and moons that have atmospheres.

1. Kaplan, Joseph. "The Aeronomy Story: A Memoir." In Essays on the History of Rocketry and Astronautics: Proceedings of the Third Through the Sixth History Symposia of the International Academy of Astronautics, edited by R. Cargill Hall, Washington D.C.: NASA Conference Publication 2014, 2 (1977): 423-27.