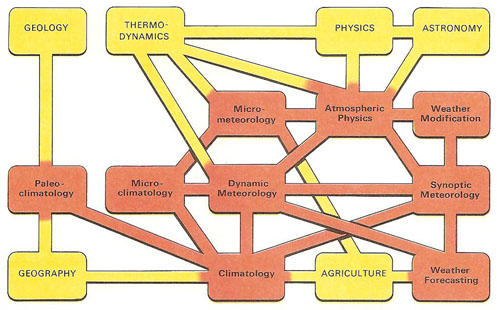 The principal branches of meteorology (red) and their links with allied sciences (yellow).

Meteorology is the study of the atmosphere and its phenomena, weather, and climate. Based on atmospheric physics, it is primarily an observational science, whose main application is weather forecasting and control. The rain gauge and wind vane were known in ancient times, and the other basic instruments – anemometer, barometer, hygrometer, and thermometer – had all been invented by 1790. Thus accurate data could be collected; but simultaneous observations over a wide area were impracticable until the development of the telegraph. Since World War I observations of the upper atmosphere have been made, using airplanes, balloons, radiosonde, and since World War II (when meteorology began to flourish) rockets and artificial satellites. Radar has been much used. Meteorology may be classified by the type of phenomenon observed: clouds, precipitation and humidity, wind and air pressure, air temperature, and storms. More basic is the scale of the phenomena: the microscale deals with small, transient phenomena up to about 10 km in size and lasting, say, 1 hour; the mesoscale, those up to 200 km across and lasting a few hours; the synoptic scale is that of daily national and continental weather maps, while the macroscale treats of global, seasonal phenomena. The general circulation of the atmosphere is zonal by latitude (see jet stream). Imposed on this are disturbances – chiefly cyclones and anticyclones – due to imbalance of pressure and temperature. An air mass is a large region of air, roughly homogeneous horizontally, which forms by stagnant contact with a land or sea surface and which then moves elsewhere. When two air masses of different properties meet, a front is formed. See also isobar; isotherm.