Fig 1. The first self-propelled road vehicle, built in 1769, was a tiller-steered, two-cylinder, steam-powered tractor. Its "engine" was on the single front wheel and was designed to pull guns. It involved its inventor in the world's first motor accident when it hit a wall. 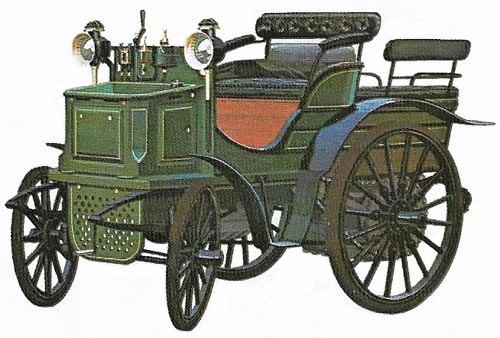 Fig 2. Panhard and Levassor (1894) was developed from the 1891 design. It had a Daimler engine mounted at the front of the car, with the drive passing through a clutch and gearbox to the rear road-wheels. The French design was to be adopted as the standard modern layout.

Fig 3. The Mercedes, built by Daimler, appeared in 1901. Technically advanced for its day, it had a 35 bhp, 5.9-liter engine and gate change.

Fig 4. The 1907 Rolls-Royce Silver Ghost, of which 6,173 were produced, played a major role in building the firm's reputation. Its 7-liter engine gave 48 bhp. 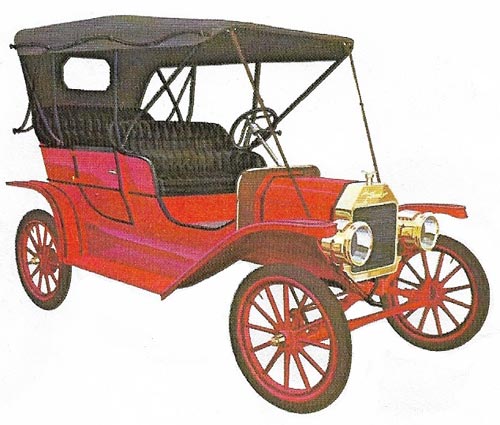 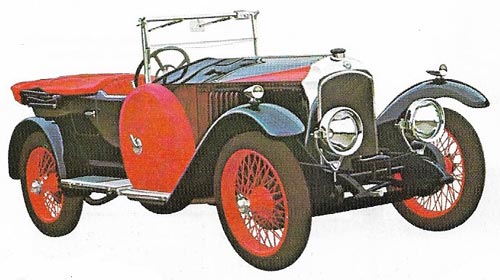 Fig 6. A classic of the vintage era, the Vauxhall 30/98 was famous for its successes in sprints and hill-climbing competitions.

Fig 7. The revolutionary front-wheel drive Citroen of 1934 was the model for this 1939 15CV and subsequent models. 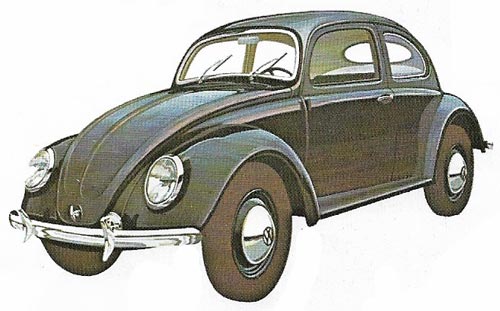 Fig 8. The Volkswagen, a car for the people, was designed by Ferdinand Porsche (1875–1951).First planned in 1934, the designed of the air-cooled rear-engined "Beetle" changed very little thereafter. 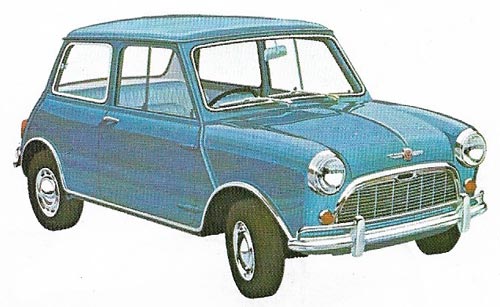 Fig 9. The Mini, launched in 1959, was an instant success. Designed by Alec Issigonis (1906–1988), it had a transverse engine with integral gearbox, front-wheel drive, and an all-independent suspension.

The automobile is a road vehicle that first appeared in the nineteenth century. The first cars were propelled by steam, but were not a success. The age of the motor car really dates from the introduction (1885–1886) of the gasoline-driven carriages of Gottlieb Daimler and Karl Benz. The internal combustion engine of these cars had been developed earlier by several engineers (most notably Nikolaus Otto (1832–1891) in 1876). More than a hundred years before that, the first self-propelled road vehicle had rumbled through the streets of Paris at nearly 5 km/h (3 mph) when Nicolas Cugnot (1725–1804) demonstrated his steam-driven wagon (Fig 1).

The main components of a motor car remain unchanged. A body (chassis) to which are attached all other parts including: an engine or power plant; a transmission system for transferring the drive to the wheels, and steering, braking, and suspension for guiding, stopping, and supporting the car.

Early cars were assembled by a few experts, but modern mass-production began in the early 1900s by Henry Ford and R. E. Olds in the United States. In most modern car factories, component parts are put together on assembly lines. Each worker has a specific task (such as fitting doors or crankshafts). Bodies and engines are made on separate assembly lines which converge when the engine is installed. Overhead rail conveyors move heavy components along the assembly lines, lowering them into position. The final stages of assembly including the fitting of items such as lights and paint spraying. Electrical, braking, and control systems are checked. The assembled car is tested before sale. Recent technology has seen the introduction of robots (specifically, robot arms secured to the workshop floor) on the assembly line. They are usually used for welding and painting.

Increasing concern over the environmental impact of the car (such as congestion, pollution, and energy consumption) has encouraged governments to examine alternative forms of mass transport, oil companies to produce cleaner fuels, and car manufacturers to look at alternative power plants, such as electric- or gas-powered motors.

Nikolas Otto made the first four-stroke internal-combustion engine in 1876 and in 1885 Daimler had installed a small four-stroke engine in a cycle frame. He drove his first four-wheeled petrol-driven vehicle round Cannstatt in 1886. In neighboring Mannheim, Benz had tested his three-wheeler car.

Daimler licensed the French firm of Panhard and Levassor to build his engine. Levassor placed it at the front of his crude car (Fig 2) and it drove the rear road-wheels through a clutch and a gearbox. Thus in 1891 the first car to use modern engineering layout was seen. Within three years of the appearance of the first Panhard France was staging motor races on public roads.

At the turn of the century, petrol, steam and electric power shared almost equal popularity for powering automobiles. Steam was well-tried and reliable and electric vehicles held the land speed record. France had several established motor manufacturers – Panhard, Peugeot, Renault, Daracq, Delahaye and others; in Germany Benz had made the world's first standard production car, the Velo (1894), and the Daimler company was just about to present the Mercedes to the public (1901) (Fig 3).

In the United States the automobile would develop along different lines. There the car was seen not as a rich man's toy, but as a new method of communication in a continent in which travel had been restricted by a lack of roads and great distances.

Great Britain, slow to start, had legislated for the car in 1896 when the road speed limits were raised and soon such companies as Lanchester, Daimler (of Coventry), Wolseley and Napier were producing cars.

Encouraged by the keen interest shown by King Edward VII, motoring in Britain became an accepted method of travel – for the rich. Some British manufacturers began to contest French car supremacy and among them the partnership formed in 1904 be-tween Charles Rolls and engineer Henry Royce was one of the most significant (4). At that time Henry Ford was preparing the motoring world for his Model T, which was introduced in 1908 (Fig 5).

By 1910 automobile design had become fairly settled, with a side-valve four- (or six-) cylinder front-mounted engine. Weather protection had been developed, and the electric starter from America (1912) had encouraged women to take to the wheel by removing the physical hardship of the starting handle. Interchangeable parts made to fine limits opened the gates to mass production. The Edwardians had laid down the working principles and the following years saw more refinement than innovation. "Balloon" tires, pressed-steel wheels and four-wheel brakes appeared. Heavy and unstable coach-built saloon bodies encouraged the trend to wood-and-fabric and later to the rigid, welded pressed-steel body.

Greater demand by the public in the 1920s brought cheaper cars on to the market from such manufacturers as Morris, Citroen, Opel, Austin and Fiat, although such exotic models as Hispano-Suiza, Maybach, Voisin and Delage still commanded respect – and a deep purse. The economic depression of the late 1920s closed down many companies of both classes, from Clyno to Bentley, and forced the production of even more basic cars.

By the 1930s most cars were being made for the new middle-class "family'. driver, uninformed in motoring matters and requiring a near foolproof vehicle. There were some technical milestones, however. In 1934 Citroen produced the Traction Avant (Fig 7), the first medium-sized car to have front-wheel drive and independent suspension, and in 1938 the German car that was to become the Volkswagen (people's car) was finalized and tested – the only car to have spanned four decades (Fig 8).

The first postwar cars were similar to prewar models, but in 1948 two British cars destined to influence future design appeared – the wide-tracked Morris Minor and the 193 km/h (120 mph) Jaguar XK120 sports car. In 1955 the hydro-pneumatic suspension system of the Citroen DS 19, a sophisticated successor to Citroen's 1934 car, astonished the motoring world. The end of 1959 saw the introduction of the Morris Mini-Minor/Austin Seven, now universally known as the Mini (Fig 9). It had a transversally mounted engine, front-wheel drive, rubber suspension and short wheelbase.

Since then the automobile has played a more and more important part in modern life, until now its numbers have become a threat to health, to energy resources and to mobility itself — hence the renewed interest in pollution-free electric cars.

Karl Benz was a German pioneer of the internal combustion engine. After some success with an earlier two-stroke engine, he built a four-stroke engine in 1885 which was first applied to a tricycle. Benz achieved great success when he installed the new engine in a four-wheel vehicle in 1893. Benz was the first to make and sell light, self-propelled vehicles built to a standardized pattern. Hundreds had been built by 1900.

Gottlieb Daimler was a German engineer and automobile manufacturer. In 1822, with Wilhelm Maybach, Daimler established a research laboratory where a year later they developed a lightweight petrol internal combustion engine. Daimler used this to power a motorcycle and then his first car (1886). In 1890 he founded the Daimler Motor Company, which made Mercedes cars, and in 1926 became Daimler-Benz and Company.

Henry Ford was a US industrialist. He developed a gasoline-engined car in 1892 and founded Ford Motors in 1903. It achieved huge success with the economical and inexpensive Model T (1908), which from 1913 was produced on an assembly line, lowering production costs enormously. Almost as startling was Ford's introduction of an eight-hour working day and a relatively high basic wage.