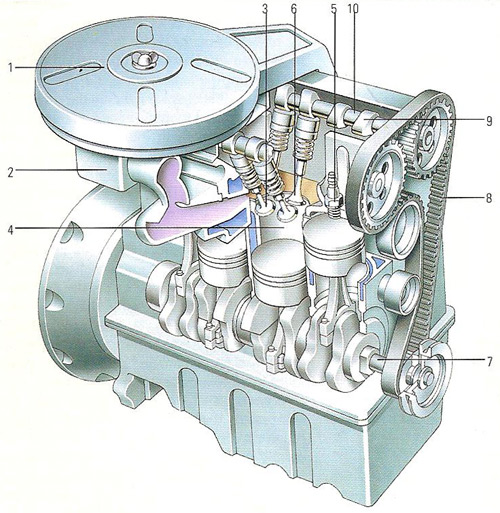 An in-line, four cylinder gasoline engine is the most common internal combustion engine used in cars. Air is sucked through a filter (1) into the carburetor (2), where it mixes with the gasoline. This mixture then enters the cylinders through the dual inlet valves (3) on each cylinder (4). The spark plug (5) then ignites the mixture forcing the piston rapidly down. The burnt gases are expelled through the outlet valves (6). The reciprocating motion of the pistons is converted into rotation by the crankshaft (7). The crankshaft also turns the timing belt (8) that controls the opening of the valves, through the cams (9) located on the camshaft (10), and also the firing of the spark plugs.

An internal combustion engine is a type of engine, widely used in cars and motorbikes, in which fuel is burned inside, so that the gases formed can produce motion. An internal combustion engine may be a two-stroke engine or a four-stroke engine. In the most common type of engine, a mixture of gasoline vapor and is ignited by a spark plug. The gases produced in the resulting explosion drive a piston down along a cylinder. A crankshaft changes the reciprocating (to-and-fro) movement of the pistons into rotary motion. In the Wankel rotary engine, the gases produced in the explosions drive a triangular rotor. The diesel engine in another form of internal combustion engine.

A four-stroke engine is an internal combustion engine in which the operation of each piston is in four stages. This kind of operation is called the four-stroke cycle or the Otto cycle, after its inventor, Nickolaus Otto. Most internal combustion engines of the type found in cars, including diesel engines, use the four-stroke principle. Each of the four stages corresponds to one movement of a reciprocating piston along a cylinder. First, the piston descends to admit the fuel-air mixture (intake stroke). Second, the piston rises, compressing the mixture (compression stroke). Third, the mixture is ignited by a spark or compression, and expanding gases from the explosion force the piston downward (ignition or power stroke). Fourth, the piston again rises to expel the spent gases from the cylinder (exhaust stroke).