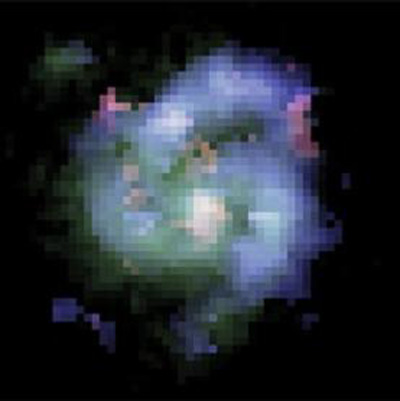 Composite false-color image from the Hubble Space Telescope and the Keck Telescope in Hawaii showing BX 442's spiral structure. The companion galaxy that may be responsible for BX 442's spiral shape is visible to the upper left. Image: David Law; Dunlap Institute for Astronomy & Astrophysics.

Large spiral galaxies, like the one in which we live or our neighboring Andromeda Galaxy, were thought by astronomers to take billions of years to be crafted by interactions with other systems and the repeated passage of density waves through their starry disks. But the discovery of what appears to be a genuine spiral galaxy in the early universe has challenged that conventional wisdom.[1]

BX 442 has a redshift of 2.18, which corresponds to a time 10.7 billion years, long before the Sun formed, and only 3 billion years after the universe itself came into existence. In a group of more than 300 galaxies of similar age examined by the Hubble Telescope in a new study, only BX 442 shows a spiral structure. And its "grand design" structure with large well-defined spiral arms has left researchers scratching their heads for an explanation.

The presence of a dwarf galaxy in the vicinity of BX 442 offers a clue has to how the premature spiral structure may have emerged in what would otherwise by a somewhat chaotic lumpy collection of stars, as is the case with most of other early galaxies. A recent study of one of the satellite galaxies of the Milky Way, known as the Sagittarius Dwarf Elliptical Galaxy (SagDEG), suggest that SagDEG may have helped generate some the Milky Way's spiral structure when it passed repeatedly through the plane of our galaxy over the past few hundred million years.[2] A computer simulation has shown that the dwarf companion of BX 442 could have had the same effect. However, the chaotic motions of the stars in the youthful BX 442 suggest that, if this is the case, the present spiral structure will not be long-lived in cosmic terms, and may have disappeared within a hundred million years or so.